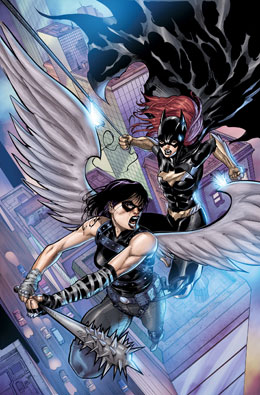 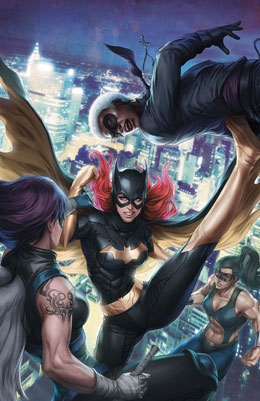 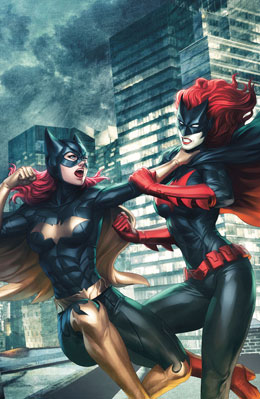 Please don’t tell me this Knightfall thing is a Batman-crossover thing. Again with the crossovers that I don’t care about. The events I’m not picking up because they are woefully unsatisfying and very few have been executed with any kind of carefully crafted storyline.

Also the cheesy “Death from above” text (which the cover artist so did not put in) is so ’90s that it hurts. Seriously, Jim Lee, stop doing stupid shit that made you famous in the ’90s. We’re over it.

Martinez’s pencils aren’t bad. They’re probably some of the best that have been on this book so far. My only complaint is that out of her uniform, Babs looks really fragile. And maybe that’s what Martinez was going for with this storyline about Babs leaving Ricky behind. However, we all know she has some muscles.

I think Charise Carnes could be a very interesting character. Especially in the world that Bruce Wayne occupies. And I’m betting that the tortured man she keeps in a cage is the one who killed her family. That said, I’m not completely sold on the Disgraced as supers that Babs must fight. We’ll see. Seems like Babs needs her own team…

Alysia’s definitely being manipulated by James. No doubt about it. I get that it makes the story more “interesting”; but at the same time, it would be nice to have a character with a different POV than our hero and not either be crazy or manipulated by someone who’s crazy.

And finally…Lois Lane. I love you!

Okay, looks like Knightfall is Charise, not some giant crossover in the works. Maybe authors now need to ask themselves, does this sound like a giant crossover or just another villain? How has this name been used before?

I did love that Babs taking on three villains, even if Mel McKenna had to save her. Charise’s contacting police, judges, etc. is definitely an interesting take and a smart one. The more they give about her story, the more I don’t think she murdered her family.

I’m interested to see how Simone will further team up Babs and Mel. I like that they don’t trust each other, but they have to. And how they keep manipulating each other. Though Mel definitely pulled that gun too soon.

Mostly, I think I’m looking forward to the next issue with Batwoman.

Yeah, none of us actually believe that Batgirl is dead. Except Knightfall. But she’s a little crazy. And obviously keeping her parents’ killer in the cage and torturing him, along with Ricky.

Batwoman is basically the best. I’m so glad that she and Babs have teamed up. It’s also really interesting to see Batwoman from Batgirl’s point-of-view. Because she’s such a new character, she hasn’t been written by many people and hasn’t interacted with many other DCU characters.

I’m also interested to see where this falls in the universe’s time-frame compared to the Batwoman comic. I thought that Batwoman was supposed to be further in the future, but apparently not. Batwoman certainly didn’t start out working for the DEO, and I’d hope in the future that she can get out from under their control.

It does creep me out that James Jr is controlling Knightfall. And I’m not sure why she chose the villains she did to be part of her team. Seems like she would’ve instead gone after people with similar stories to her own.

I’m still hoping that this title will get another artist.