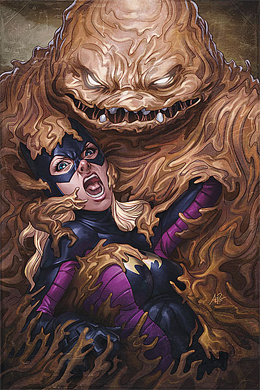 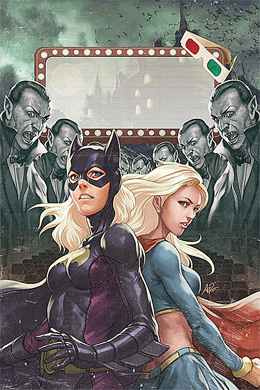 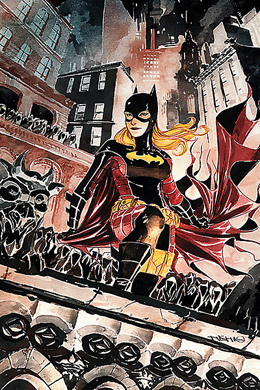 This was a very solid one issue story, which does build on the past issues, but you don’t need them for context. Which I think is a pretty good sign for the third arc of Batgirl.

While I’m cool with Wendy’s development, her taking over Babs’ role, and have a general good will toward comic books which take a realistic view of how many places one person can be at one time, I do think it is a little silly to have Babs confined to one book when Batman has like 12.

Stephanie showing her detective side was really great in this issue. I liked all the deductive reasoning employed to track down Clayface. And to take him down. I also adore Stephanie’s team-ups with Nick and how much she trusts him. Their flirting was cute. But I think perhaps she and Babs need to have a sit-down and discuss Nick.

I continue to love this title at lot. Batgirl is probably my favorite on-going DC title. Sometimes, I feel like it hasn’t really gotten the props that it deserves because it is awesome. And this issue was no exception.

I loved that Miller did a Friday in the life of Stephanie Brown issue. As anyone who’s been reading this blog probably knows, I’m a big fan of these type of issues when done well. The bits of insight given about Stephanie are just great.

Plus, I completely identify with her college Friday night. While, I may not have hung out with my mom (who was a state away), I did get together every Friday night with my friends and watch geeky TV. Which does not fit the party stereotype of the college student. And like Batgirl’s night with Supergirl, I always had a good time and didn’t “miss” out on anything.

Sometimes, in comic books, when a writer introduces vampires into the plot, it feels like s/he’s run out other ideas. But the use of Dracula, as a 3-D screen projection and science experiment gone wrong, is pretty original and works well with this book’s tone.

Both Garbett’s art and Miller’s count-down as Stephanie and Kara fight through the 24 Draculas was well done. I really liked how the mission to kill the Draculas was incorporated into their night out. They did stop to eat ice cream and take their pictures in a photo booth.

The emo, 24th Dracula tied nicely back to the beginning where both Kara and Stephanie thought that the movie was both depressing and boring. Indeed, a sad vampire on a loop is just depressing.

I hope Miller sticks to the women’s pact to see each other more often and have nights like this.

I’m really happy that Nguyen’s doing the art for this book. I really loved what he did on Batman: Streets of Gotham, and I’m glad he’s being used on a title as awesome as Batgirl.

I completely have to agree with those are are upset about Cassie not being mentioned in the opening. They make a point to mention everyone else — except Batwoman, but at least that makes sense — but no Cassie. Which ruins an otherwise really adorable introduction to the Batfamily, including the fabulous snappy comment about Damien wetting the bed. Miller also missed Alfred. But no one appreciates the person doing laundry, until you run out of clean underwear to wear over your tights.

I still hold out a little hope that Cassie will show up in this book.

Though it was nice that Oracle can be in more than one Bat book. I mean, Bruce and Dick are in like 12. Especially with the whole launch of Batman Inc. Whatever that is.

This whole plot on campus seems a little bit of a weak mystery for me. And it wasn’t a big surprise that Batgirl got pegged for the murderer. But mostly, I was so happy with Nguyen’s art that I didn’t mind the weak plot. Or the Grey Ghost throwing off Stephanie from her mission and acting as the red herring.

Of course, Nick or Detective Cutie Pants, as I think he should be called, is the one who’s on the case. If Batgirl truly gets hauled into jail, it would serve her right, a little bit. But my prediction is that somehow Nick will find out her true identity. And this will also lead to a situation where she has to tell her mother that she’s Batgirl again. Miller’s brought it up too often that Crystal doesn’t know of her daughter’s nighttime crime fighting to not use it.

Catch up with Batgirl, buy Batgirl: The Flood by Bryan Q. Miller