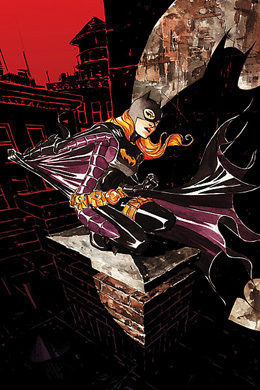 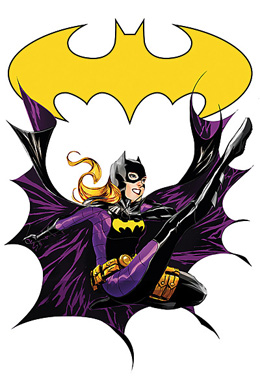 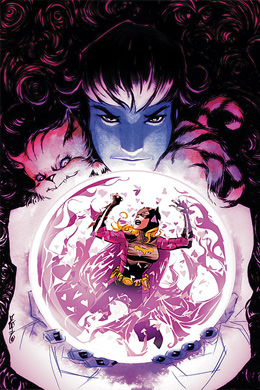 Why doesn’t it surprise me that Batgirl didn’t stay a fugitive for more than 24 hours?

I’m really digging Nguyen’s art on this book. His layouts are really fun, and I think he does a great job with Stephanie’s world.

While the whole Nick-Stephanie-Babs love triangle, flirt thing is cute in that Nick believed that Batgirl was innocent, the GCPD is currently the worst police force on the planet. I mean there was footage of the murder that no one bothered to look for. Even Oracle and Proxy were slow to look. And they’re always supposed to be one step (or 12) ahead of the police. Seemed a little weird and like some bad police and detective work to me.

Also, has no one noticed that Batgirl hurt her shoulder and that Stephanie is walking about in the sling? Just saying. Isn’t her mom going to be like, ‘omg, Stephanie, you’re injured! Are you fighting crime again?’

Can I have a comic book where it’s just Stephanie and Damien going around being still-in-training crime fighters forever? Also scenes with Alfred trading jabs with Damien. (On the other hand, in my short time as a babysitter, I’ve watched kids with Damien’s attitude and energy levels so I feel for Alfred, who I’m sure thought Dick, Jason, and Tim were bad enough.) I love how Damien knows exactly how long Bruce sleeps a night, and a nice call out to how, yeah, if Batman does all that, he wouldn’t be sleeping much.

The contrast between Stephanie’s and Damien’s mornings were perfect. He’s all about discipline, while being psycho, and she’s oversleeping. Perez adding the detail of her drooling in her sleep was perfect. I liked how they both shoved away their caretakers, who spent time preparing them breakfast. Though one prepared out of love and the other out of duty. (Not that I think Alfred can’t love Bruce’s boys, but that Damien doesn’t allow himself to be loved.)

The scene on the fire escape with the upside-down crossing guard was just spot-on. They’d both approach their cases like that. And of course, Batman assigned them to work together without telling them that because they both would’ve disagreed.

Damien going undercover as a kid was hilarious. I loved the scene where Stephanie realizes that Damien doesn’t know how to have fun. I like that she feels sorry for him without pitying him, instead she makes it her mission to teach him how to play and have fun. (Though not without them saving the day together, despite the snafu of Damien not being able to reach the peddles to stop the bus.) The ending was just wonderful.

What really made this comic book for me was the art. I love what Nguyen was allowed to do here with his creativity. I loved the world of limbo and tiny Stephanie trapped in the bubble cell. This was some of my all-time favorite art in a Batgirl comic book. I wish the books could be this pretty all the time.

The story of the Witch Boy Klarion and his familiar/cat Teekl was very adorable. I liked it as a Valentine’s Day tale; mostly because it wasn’t about Stephanie pining over some boy. Though all and all, even Stephanie seemed rather unconcerned about the people that Teekl killed as a were-cat before she and Klarion could capture him.

Their venture to Limbo was cute. I loved the pilgrim costumes and that non-witch trials. Plus, it’s just like Stephanie to start a fight trying to distract someone. Especially a fight that begins as a compliment.

The part where Stephanie kissed Klarion and was immediately disgusted by it was also cute. Though I’m surprised that Francisco, Jordanna, and crew made no mention of Klarion’s blue skin. Perhaps that’s just all part of living and growing up in Gotham City.