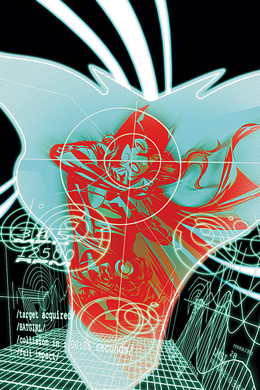 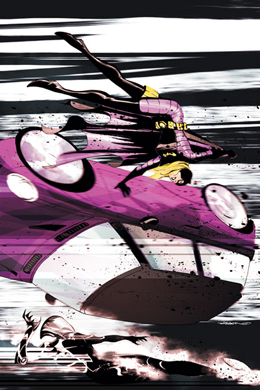 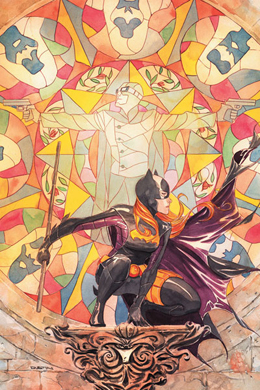 I’m still a little mixed on how I feel about the Grey Ghost in general. In some ways, I feel like Clancy is being treated like all the Bats have always treated outsiders, until you sometimes inexplicably become part of the family. Or if we want to get deeper, how the women were originally treated by the men. Especially how Batman and Robin always knew the original Batgirl’s and Batwoman’s secret identities, but they weren’t let on (until modern days) to who Batman and Robin really were.

If the whole bank robberies and deaths thing around Slipstream is a way to get Steph closer with Nick, I’m just fine with that.

Proxy is completely justified in being upset. I’m glad she’s back on board with Stephanie. But yes, I’d be pissed too. The hologram thing was pretty cute at the end.

I love this cover by Dustin Nguyen. The limited color palette works well, and it really shows movement beautifully.

Of course, then I open the book to read. Yeah, I’m not really digging Bachs’ art. It’s a little too Riverdale and not enough Gotham City. Especially how he draws people’s heads.

As far as the plot, I think it’s finally moving at a better pace. I like how much more information we’re getting about the villains, and I loved the reveal of Nick’s past. Which just really makes him even more of a good match for Stephanie. Just saying.

I thought how they tripped up Slipstream by going into the tunnel was brilliant. As was how Stephanie didn’t even notice that she was sitting right next to the bad guy for her entire class. I love that Stephanie is smart, but not an observant genius.

I’m super happy to see Nguyen back on the pencils for this book. I love his art, and I especially love it in a Gotham book.

Batgirl’s battle with Newton isn’t as interesting as her battle with Slipstream. Perhaps, Miller’s just trying to move the plot along a little faster, and he can’t spend as much time developing each villain for Steph to fight.

Oh, Clancy, he really tries hard. But the Grey Ghost just manages to get himself hurt. In a way, it’s very Batman (and Oracle) for Stephanie to tell him to go home. I’m just surprised that Batman himself hasn’t.

I’m rather surprised that Miller decided to send Wendy packing for experimental surgery. And to give her a kind of meltdown where she sees her brother Marvin’s ghost. Especially since there was so much time putting into developing how Wendy is not like her father, especially in the not crazy department. It’s seems rather unbecoming of the story to ship Proxy off, and I can’t help but wonder if this development has something to do with the big DC reboot coming in the fall. If there’s a reason why Steph needs to be alone. (DC, you better not kill her off when you relaunch Babs as Batgirl!)