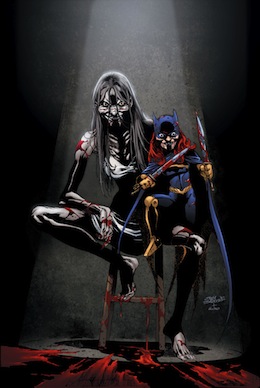 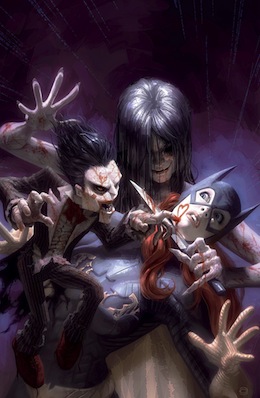 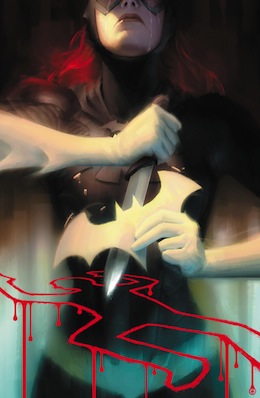 Can I just start with how much I hate evil puppets? Especially Ventriloquist. (From the cover, I thought that Junior might be making an appearance in the New 52 as it doesn’t get much creepier than her.) Also not sure why Shauna has to be so skinny. Doesn’t seem like malnutrition would be helpful when being a super villain.

Oh, Babs, she’s having yet another crisis of faith in herself. Interesting that she saw it fit to continue to be Batgirl, while cutting the yellow bat symbol from her costume.

Sure Jim’s all about law-and-order. However, he’s a bit overzealous about tracking down James Jr.’s killer. Also, they never recovered a body, which in Gotham means he won’t really be dead. And I thought Jim knew that Babs once was Batgirl? Also, you’d think Jim would call Babs or get in contact with her to make a connection with her mom and tell her that James was killed? Seems that we’re missing a few steps to this family tragedy.

I hope that Ricky continues down his road of redemption, and that he continues to see Babs. Even if his brother’s still a gang member or a possible leader.

I’d also wondered what had happened with Knightfall…

Oh, Babs, she always reaches out to Dick when things go south. I did appreciate the contrast of him being in battle and her calling him, which normally, I’m all about getting the female character out and fighting. I do like that Simone kept it more toward shop and talk about James instead of any relationship-ness that might’ve happened.

Speaking of relationships, surprised to see Jim and Barbara kissing. But not surprised that Barbara hates Gotham and won’t stay there. She’s the only sensible one. However, she could’ve served well to pull Jim off Batgirl’s tail. I don’t think the inevitable “Mom knew I was Batgirl” is going to go over well.

Glad Babs was able to take down Ventriloquist without much craziness happening. Except in that it was a little scary. And Shauna’s “relationship” with her puppet is totally fucked up.

Alysia is the best roommate. I love that they’re making cookies together and that Babs forgets she has a date with Ricky. Somehow, I don’t think he’ll mind her covered in flour.

Now this is the issue that I’ve been waiting for a long time.

I love Babs going on a date with Ricky. I love seeing her be the “normal” girl. But, of course, they get mugged by rival drug dealers to Ricky’s brother, and Babs can always look after herself. I’m a bit surprised that Ricky hasn’t put two-and-two together more. In fact, I’m hoping for one of these issues for him to say something about that. Like just that he’s always known.

Love that they go dancing and that Babs meets his family. Plus, it’s nice to have layers that she doesn’t immediately peg his brother as a criminal.

Ooh, Jim is pretty broken on James Jr. being dead. Of course, a parent would be. But I’m surprised how much grief he has. And that he’s insisting on Babs learning how to use a gun and trying to shake down Batman for information about Batgirl’s identity. (Batman must think he’s pretty stupid.)

Anyway, I feel like this is the issue I’ve been long awaiting Simone to write. Plus, I’ve been enjoying Pasarin’s art.

Continue with Babs on her journey, buy Batgirl Vol. 4: Wanted