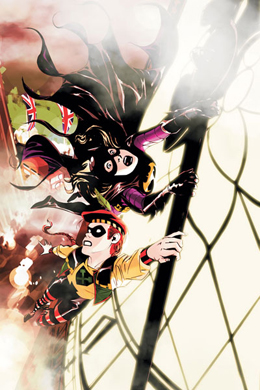 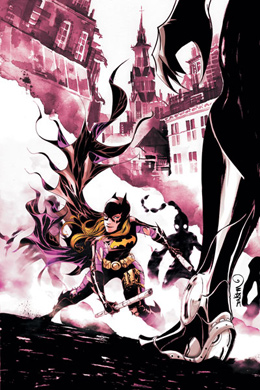 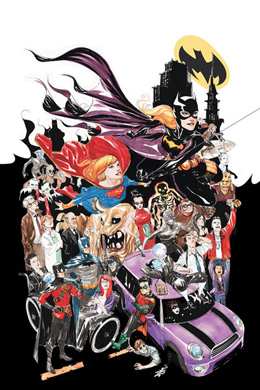 This issue was cute and precious. Too cute. The kind of cute where I threw up a little in my mouth. Also that I had to buy another title to see the ending of this story and why Batman wanted Steph to come to London.

The whole tourist and overly British jokes between Steph and Beryl were just too much. It was all too much. I’d rather there have been more Batmen jokes, like at the beginning where Beryl makes bat-ears when she’s talking about Knight and Steph assumes she means Batman.

The entire Orphan freezing time only so he can kill Knight was rather ridiculous. I felt the whole romp was too much one big, silly British joke. Perhaps taking Steph out of Gotham City just makes her too wacky. I mean the issue with the magic cat who just wanted to mate was less ridiculous.

I am so going to miss this title. I adored it as the “light and fun” tale in Gotham City.

I’m not entirely sad that Miller killed off the Grey Ghost. I’ll be the first to admit that he wasn’t my favorite. But now I’m kind of pissed that Miller did because I feel like this is going to be a plot device for Stephanie to want to step down from the Batgirl mantle. Well, that and this all being a trap set by her father.

Blah to Detective Nick and his involvement with the Reapers getting his fiancee killed. Blah also to Stephanie suggesting that he try to date Babs. (Yes, in this ship-war, I came out on Stephanie’s side.)

Stephanie going plunging into the clear trap at the jail was all perfect Stephanie. Especially since she didn’t have the back-up of the police, Proxy, or Oracle.

The moment, however, when she said “Shazam” and Jabberwock paused in his killing of her and asked if she had magic powers: priceless. But yeah, truly something to watch out for in the DC universe.

I loved Supergirl, Bombshell, Stargirl, and Miss Martian showing up to help Stephanie take out the Reapers. Brilliant. I even loved the cheesiness when Bombshell considered her lines and almost said, “It’s clobbering time.”

I was surprised as Stephanie when she found Cluemaster, her dad, at the end.

Of course, Cluemaster would be a big enough jerk to escape using his own daughter and to poison her. I guess only villains think that they’re offspring are so awesome, they should be able to resist any drug.

I love that Stephanie’s mom shows up and knows who she is. I love their talk about Batgirl’s mom. And I adored that it ended with the acknowledgement of her knowing that Steph is Batgirl.

I also loved all the kids who were awaiting Batgirl’s recovery. *hearts*

Each and every hallucination Stephanie had under the plant’s influence was awesome. I love how they are all stories that say something about Stephanie being a hero and about the people around her. Each is a tale in itself, not a static point.

Oh, what a perfect ending to an awesome comic. I’m going to miss this book so much.