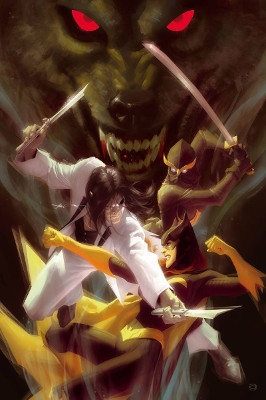 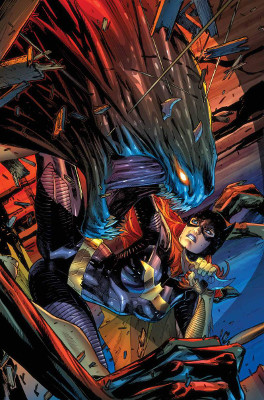 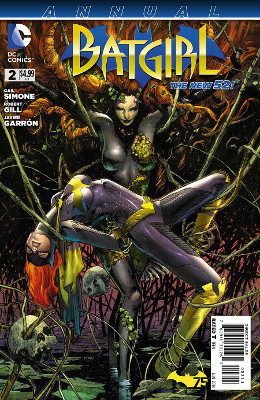 I’m actually really surprised how this story turned out. I’d expected it to be more gruesome, more horrific. But it was kind of whimsical there at the end.

I am really surprised that no one noticed Babs when the GPD were faced off with Silver and Miss Targa. Sure, they were occupied. But you’d think that she’d been enough of a regular to see her father that she would be more familiar.

I did not see the twist of Cissy Chastain actually being a vampire coming. Though it was odd that she was suddenly talking. Also, that might explain why Knightfall was so interested in the little girl.

Strix continuing to be unpredictable is still fun. I was surprised that Silver was able to draw blood from her.

Interesting that all the vampires and the vampire hunters disappeared. I love Babs and Strix being completely bewildered by the end.

It’s always so jarring when another writer picks up the pen on Batgirl. While I don’t think that Simone needs to write her forever, there’s a definitely flavor to her Babs that makes her a little different.

I’m not a huge fan of horror stories. In fact, I’m quite the opposite, and anyone who’s read my blog knows how much I hate crossover stories. I had no idea that Dick was dead — or maybe not really dead because Lex Luthor revived him from the Murder Machine. (Seriously, there are days when I think the best decision I made in my life was only reading three DC titles. That all sounds like a terrible and sensationalized plot.)

I wasn’t compelled by the Midnight Man. If Babs kept saying that she had more questions about what the Midnight Man wanted and how he got there, shouldn’t I have wanted the same thing? Unless it was just missing Dick and wanting to know more about his death.

There was a lot of internal monologuing. Perhaps too much.

I feel like DC is slowly sinking under its new canon. Which is why I thought they rebooted in the first place.

I thought this was going to turn more into Simone writing Birds of Prety again. Especially with the opening monologue about how much Babs loves Dinah. Which makes all the shippers a glow.

The whole pregnancy metaphor was a bit much. Especially since we never did figure out exactly what Mr. Rain’s minion whispered into Ivy’s ear. I had assumed it had to do with being pregnant. But guess not. It was probably something a bit more mundane about the implants being able to make her human again. Which I don’t understand that science since Ivy says that the implants are plant-based.

Seems like the entire warehouse of dead bodies would give the Gotham PD something to charge Mr. Rain with.

So besides the major plot holes, I did find this issue to be a great character study about Babs and about Ivy. I love how observant Babs is about the changes in people’s moods and behaviors. That Babs picks up on Ivy having S.A.D., and I adored the ending with Alysia’s garden. Even if I saw that coming the moment Alysia dragged Babs to help her plant some food.

Even with the heavy-handed metaphors, I also appreciated that tracking down Mr. Rain and building a case against him, plus getting leads, actually took time. There was lots of detective work, and it took months. Lots of the time, stories are crammed into small timeframes that expose huge evils overnight. This seemed a lot more realistic.

Enjoy things as Simone’s getting the band back together, buy Batgirl Vol. 5: Deadline