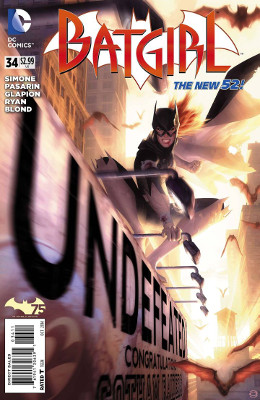 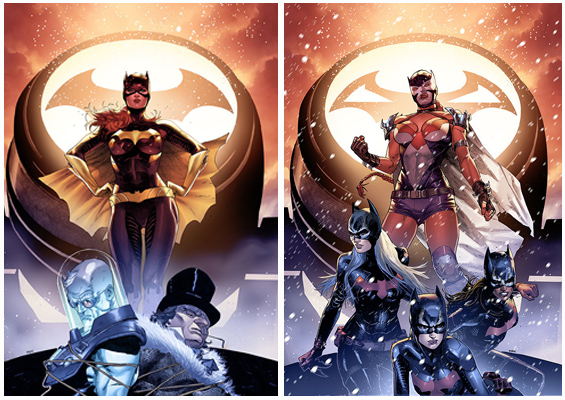 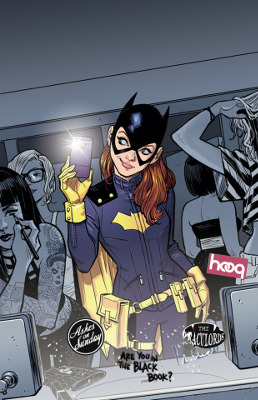 This was definitely a nice wrap-up to Simone’s run on Batgirl. Some great closure with Knightfall and the rest of the super villains Batgirl had been fighting. Plus, all the super hero ladies in action together to save Cherry Hill.

Sadly, Pasarin’s art, especially in the fight scenes, seemed rather rushed. The fight with Bonebreaker in particular just looked awkward. Of course, Bonebreaker lamenting that Knightfall said she could be a princess was just equally ridiculous.

I’m curious to see Simone’s five years in the future epilogue next month. Mostly because I’m excited to see if Babs is running away from Gotham or Obscura or Batgirl. There were some big hints and nods to her role as Oracle here.

Alysia is the best character. I hope that the new Batgirl writers continue her in the books. And I love how Babs considers Alysia family. And that she’s ready to move onto her self-made one, even though she now knows her brother’s alive, which means Jim won’t be so angry at Batgirl for killing him.

I do the love the moment when Babs both relishes in them bringing down Knightfall and crew and also not being her brother’s killer. It felt like a very refreshing moment in comics.

This was a harsh book. I subscribe to so few DC titles that I wonder if the directive for these books was to give a hard outlook on the future, to have no one completely put together. I do think Simone did justice to where her book ended and this possible harsh future.

The scene the wedding almost made me forget that James has mental controlling powers of suggestion. Babs’ narrative is that her new husband jumped to save her life. Not like her brother can make people do things they don’t want to. Or at least strongly nudge them in that direction. I did enjoy the sort of revenge of Babs beating James.

I felt the weakest part of this book was not addressing Batman. Certainly Babs couldn’t have gone around and killed all the villains in Gotham without Batman taking note. He certainly wouldn’t approve, and in the past, he’s actively worked to stop this type of action: Huntress, Manhunter, etc. Batman knows who Babs is.

I also thought it was interesting that the Joker was never addressed. While I’m not surprised that Simone used Bane, who’s one of her favorites, it does seem that even in Simone’s own writing of Batgirl, the Joker is still extremely important to her narrative.

The timeline also felt off. Seems that both Stephanie and Cassandra were older than they previous were and a lot closer to Babs in age than before. That said, I loved the addition of them, and Simone taking back all the Batgirls. Plus, adding Tiffany! (I so *want* a Tiffany Fox as Batgirl book.)

The reveal that Babs really didn’t take the venom from Bane was brilliant. Her attributing her transformation into a “goddess” as her own just warmed my heart. Loved that part of the emotional arc.

So Babs moved to Portland… 🙂

This was just fabulous. I think this book will help bring new people into Babs’ readership. As much as I’m a Simone fan, she’s a hardcore superhero writer and those stories don’t attract that broad of a readership. Even Batgirl’s first mission here to take down a data thief is far more relatable than say taking on the Joker.

I do wish that we could’ve got to see more of Babs’ new outfit on display. I love it so much. I’m seeing a million cosplays. My best friend already told me that she was on the hunt for yellow Doc Martens.

I do hope that Alysia doesn’t get erased from the book. I hope she’ll move in or perhaps discover Babs’ secret identity.

I kind of really love the fact that it was Babs’ failsafes on her van that burned down everything Dinah owned. And how no matter what happens, they are still friends and continue to put up with each other. (I didn’t read the end of Birds of Prey…)

It’s nice to just see Babs being a twenty-something. Thinking about dating, even if to capture a criminal. Having a bunch of roommates. Even partying and making out with a guy, who isn’t a superhero or adventurer.

With luck, this book will stay this fun.