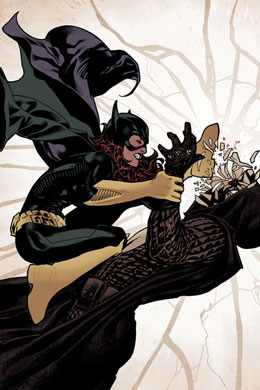 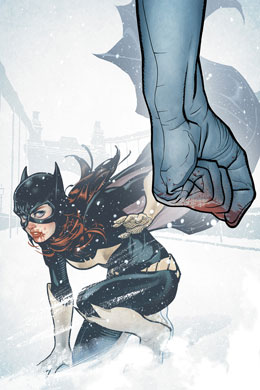 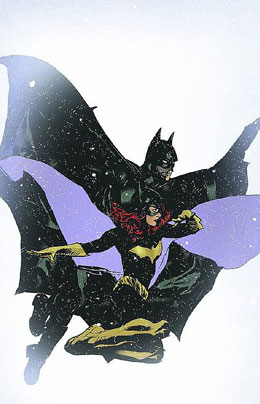 I continue to really want to like this title, but there’s just something missing. I have yet to put my finger on it. But it seems light in content. Or perhaps trying to be too heavy.

I don’t know how I feel about Babs having Christmas with her roommate Alysia. I know that she just flew the coop, and how in your early 20s when you first move out, you are sometimes not into going back home to your family. But I don’t buy Jim not coming to visit his daughter on Christmas.

I adore that app that tracks Batman. I love when technology that criminals would so use — well, criminals and those who want to track Batman for other reasons — is incorporated into the DC universe. But the entire fight scene seemed a little heavy-handed emotionally and light on content.

The ending to the Mirror’s reign of terror and Babs confronting him was well executed. It was definitely the best part about this entire arc.

I’m very interested to see what happens with Barbara’s mother.

I’d really like this art to improve. And having two artists share the load does not make it better. There’s something just not Babs about it. It seems too heavy.

Right now, I’m on the fence as to whether or not I like Gretel as a villain. She seems cool, but I’ll see how her character develops. Simone usually does a kick-ass job at writing great, 3-dimensional villains, so I have hope. The fact that she made Bruce Wayne her puppet is pretty awesome. (Though I hope there’s no dumb ‘Batman saw it coming as he’s the world’s greatest detective, just in case you forgot’ action happening.)

The appearance of Babs’ mom is still interesting. In some ways, I’m more curious to see Jim’s reaction than Babs. I’m glad that Babs stood her ground and told her mother her feelings. Of course, she’s always able to tell people the worst rather than forgive them.

I’m not sure what it is about this comic book, but it’s still leaving me a little cold. I just can’t get into it the way I usually do with Simone’s books. I do wish that Syaf was a stronger artist and could push this book to that next level. Granted, it’s been a long time since anyone’s really written Babs as Batgirl in action.

I like to think that Bruce was lying about somewhat being able to mentally block Gretel. I much prefer to think that Batgirl can kick his butt when he’s without the aid of his toys and gadgets.

I do like that Babs found a lot of compassion for Gretel. It’s very important for both showing Babs’ innocence and status as a newer superhero, but also how this new ‘verse has changed her. Not that Oracle didn’t have compassion, she just often had a little more black and white view of “do the crime, serve the time.”

Babs’ mom and her cookies is just weird. I know, it’s your roomie’s mom, but who lets a stranger in to go on a baking spree.