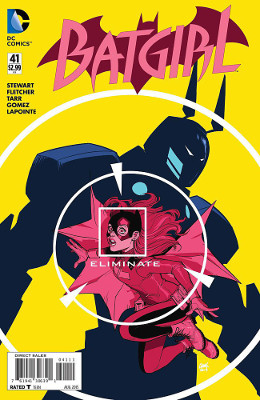 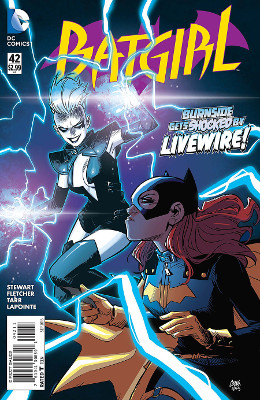 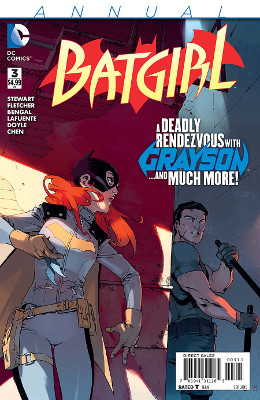 This book continues to be a lot of fun. I love Frankie helping her and taking on that Oracle role. And how she almost says her new superhero name, but then gets cut off.

Babs also worrying about Frankie as a civilian was perfect. I loved Frankie’s commitment to their cause and determination to get used to the hours. Good thing Jim showed up with coffee.

Surprised that Jim immediately told Babs about him being the man behind the new Batman suite. (I haven’t been following the major titles, so I’m not sure what this development means for the rest of the universe and Gotham City. But I assume Batman’s spread thin as usual.) Babs’ guilt here over not telling Jim that she’s Batgirl was perfect. I’m kind of surprised that he hasn’t guessed at all.

Babs is definitely in another pickle of her father finding out and then feeling betrayed. Or accidentally throwing his daughter into prison.

While it’s a good storyline, I’m just not that interested in Babs’ relationship with her father or Jim as Batman. Particularly Jim hasn’t be of any interest to me, and I’ve been pretty happy with a story about Babs striking out on her own.

I am glad that she and Frankie continue to work together. Not to mention they save Jim with their combined powers. He was clearly going to get fried by Livewire.

I love that Stewart and Fletcher are continuing to bring Alysia into their book. I love that Jo and her are getting married, and Babs is going to be the maid of honor. I’m also happy for Qadir being back in this book. Yay for Batgirl and all her friends.

Not sure how well this Annual actually worked or served as a cross-marketing opportunity for DC. While it’s nice to see Batgirl’s place in the greater universe, I’m not sure how much anyone actually cares about this whole mission.

I’m sure Dick and Babs shippers were flipping over this almost meeting. Classic that Babs noticed Dick because of his butt. Such a fandom joke on paper.

However, I was much more interested to see Babs meeting and fighting with Helena and Stephanie and working a case with Kate. Those are characters I’m more invested in. Especially as there’s some notion about building a team again.

Based on Gladius’ costume, I thought perhaps she was from Apokolips. Then I really wasn’t going to believe that Babs could win in a fight with her or that a punch to the stomach wouldn’t cause some real bad internal bleeding. Nope, her costume and cheesy name went together instead. This Negahedron super weapon would’ve even made more sense for an Apokolipian to steal. Oh, well…

Both Spoiler’s and Maps’ excitement over meeting Batgirl was great. Though I do wonder just how old Stephanie is supposed to be. She can’t be that much younger than Babs.

I’m just surprised Batman-Jim wasn’t on the scene to bring everyone together.

The gang’s slowy getting back together. Buy Batgirl Vol. 2.