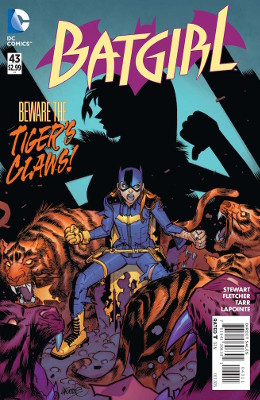 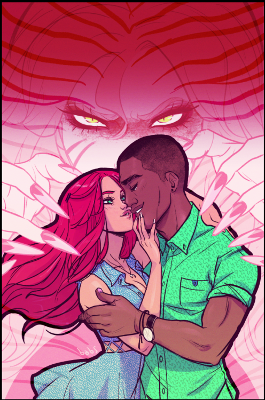 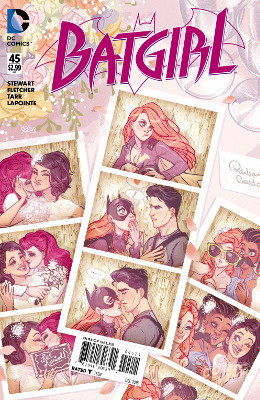 Reading this makes me really wish the real tech scene was as diverse as the one presented in the fictional techhub of Gotham’s Burnside. There’ve been about 10 different characters presented in this book to be either working in tech or computer science students. Only two of these characters have been white men — who make up like 50-75% of the real industry — and one of those men was just tiger food. Of course, these characters also get to make nifty Batgear too.

Luke and Babs flirting was super cute. I definitely like him better than the cop or Jeremy that we’ve seen her going on dates or flirting with. It’s also nice to see her with people who understand her two roles as Babs and Batgirl.

For some reason, I thought Alysia knew about her double identity, but this wedding planning shows she doesn’t. This whole problem with Jo — being framed for keeping the tigers and killing the tech workers — does play with one of my least favorite mechanisms: where characters keep trying to talk to each other, don’t have enough time, and then don’t give each other critical information. Information which they need or would greatly help characters stay out of trouble. It’s not as bad as other texts, but it slightly annoys me that Babs doesn’t slow down to hear Alysia’s concerns about Jo or see Jo looking exhausted and stressed.

Loved Nadimah talking shit about her brother Qadir and how he wouldn’t last in jail. So true. I also adored how Tarr styled her in this scene.

Also loved Frankie stealing the cowl and going to get help from Qadir. Plus, flirting with him since clearly Babs isn’t really interested in his affections. Plus, Frankie is a total bombshell in that outfit.

I’m so invested in these romantic relationships in this book in a way I haven’t been in a long time about any romances. Good going, Stewart and Fletcher.

Not to mention, this book has a tiger and I feel strongly about cats. And Jo’s trying to save them and that just hits me in the cat feels.

I’m so into this Luke and Babs romance. Especially because he knows she’s Batgirl.

Of course, the Velvet Tiger is Jeremy’s ex-girlfriend. This is a very good way to get rid of an otherwise useless character. And one who might be in “competition” with Luke for Babs’ affections.

Not sure how I feel about Babs worrying too much about Frankie getting involved in crime fighting. Luke is right that you cannot stop someone from being a hero. I mean, this has been Babs’ entire narrative of her own life. I’m hoping that Stewart and Fletcher will turn this on its head. I really want Frankie to become Oracle. But the cyborg implant at the back of her neck is rather creepy.

The Velvet Tiger was a weak villain. Babs took her down pretty easily. And I don’t know why she thought Alysia would stay in the car and not try to save her finance. Again with Babs trying to stop someone else from being a hero.

This issue was really cute and sweet and everything a wedding issue should be… However, Dick Grayson just seemed really inappropriate here. Luke’s acknowledgement that both he and Babs have dating histories helped — and was super healthy — but it didn’t make up for Dick. It didn’t make up for the fact that most of this book was Babs chasing around Dick to get Jo’s wedding ring back from him.

I wanted much more time with Luke. Also, super odd that Babs wouldn’t have gone home with Luke. Kind of tired like we’re pretending adults who are dating don’t have sex. Don’t believe it, DC.

Dick is annoying. But I am so glad that Babs was able to address their past — and how she cared for him — while at the same time setting some boundaries. (Of course, clearly, I missed some crossover where it was revealed to everyone that he was still alive and just became a super spy.) Babs didn’t seem as mad at him as she should’ve been for someone that close to her who faked his own death.

Bab’s wedding emergency kit was really cute. And all the bridesmaids’ needs. Alysia’s and Jo’s vows were sweet, and all the shots of everyone getting emotional was perfect. I really though Tarr’s art here was top-notch in that she set different tones for wedding stuff and superheroing stuff. Excellent.