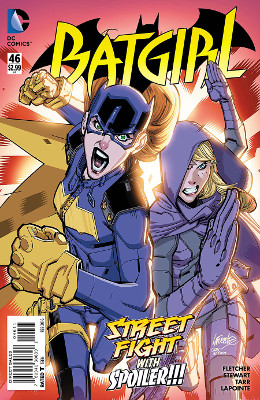 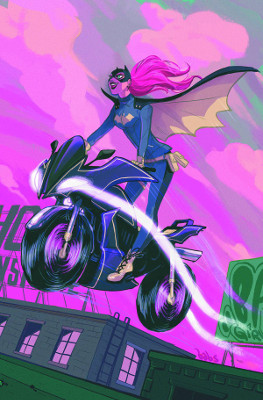 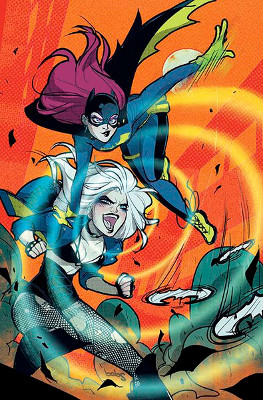 So both Batgirl and Ms. Marvel feature storylines about gentrification and how it affects their neighborhoods… Right now, Ms. Marvel‘s doing a better job. Since Batgirl is so tech-focused, I’m surprised the commentary isn’t about that. In fact, that would be one big way to distinguish the type of conversation.

I like Spoiler, but she’s rather lightweight on characterization here. I don’t see her and Babs really bonding. She also doesn’t have much of a personality yet, except perhaps plucky teenager.

Luke is adorable. More of him and Babs. Maybe she needs to sleep over in order to discover what’s been happening at night.

Yeah, don’t really care about what’s happening to Babs’ press when she’s trying to help the neighborhood, but then the gang guys are getting arrested.

This issue felt weaker in part because of the art’s inconsistencies. Even within the pages done by the same artists. Carlini seems really great when the characters are out-of-costume, but Moritat couldn’t quite match her. Moritat seems to make our characters have backbend poses. They aren’t the extremes of ’90s comics, but there are other ways to show your characters have waists besides bending them.

I really want to be excited about Babs having a team and Frankie turning into Oracle. This is a plot I can cheer about. However, Spoiler’s and Bluebird’s link to Babs is through Batman. She’s mostly like “okay, Batman says you’re cool, so I trust you.” This isn’t the type of friendship we’ve seen Babs develop with others.

The scene with Jim and Babs was pretty funny. Her constantly wanting him to grow back his facial hair is a nice running joke. Jim, however, does need to see that he and Babs are really cut from the same cloth. Instead of just saying that she never does what she’s told. I mean, who did she learn that one from?

The one narrative thing I find really frustrating and unbelievable is that if Babs is dating Luke, why isn’t she doing any of her sleeping over at his house? Okay, we’re keeping this a teen book, so we don’t need to see them having sex. But it’s unrealistic that a 20-something couple wouldn’t be doing this. And that Babs getting attacked by something in her sleep that’s causing her weird dreams (dreams to help it destroy the world) brings this issue of no sleepovers to the forefront when normally I could chalk it up to regressive DC editorial politics.

So glad that they find out creepy Greg is behind all the deleting memories and creating new ones of Babs. And that she finally started trusting her friends and boyfriend and told them. (Also huzzah for them addressing how Babs has been as Luke’s house at night! OMG!)

Batwing and Batgirl out on a date was super cute. Totally let out a fangirl squee that Babs bought the clocktower and fire station that was the Birds of Prey headquarters from the old series. (Of course, DC Rebirth is upon us so who knows what the fuck is going to happen.)

What I love about Dinah fighting by Babs’ side is that she’s one of the few characters who can save Babs. Typically Babs helps the other characters like Spoiler and Bluebird or even Frankie. And it doesn’t make narrative sense for Luke to do so. But Dinah just cuts through the bullshit and stands up for Babs no matter what. As much as I love the two of them having their own stories, I also just want them together and running around as Birds of Prey.

The moment with the groupies wanting Dinah’s signature was pretty hilarious. Loved to see Babs making fun of her. Dinah’s got fans, and she doesn’t wear a mask. Though it would’ve been a nice moment, in relation to the other book, if one of the fans offhandedly mentioned that the band was in Berlin. (Especially since I do actually think there are many fans reading both Batgirl and Black Canary, unlike many other DC books.)

With that teleporter tube, Greg definitely isn’t as bad off as he pretended to be. I wonder if he actually is someone that she knew as a kid and at camp.