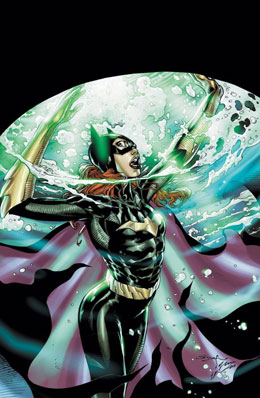 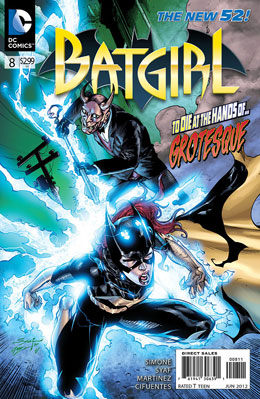 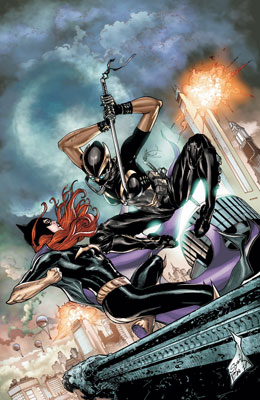 Double yay for Dinah and Babs sparing together. Love it. I’m so glad that Simone’s like “they’re hanging out” and working beyond having separate books. I’ve always said that if Batman can be in like 12 books then so can the ladies.

I love how well Dinah knows Babs, even if Babs doesn’t really want to talk about her issues.

Interesting that Barbara Sr. finally went to talk to Jim. This makes me think that she’s not a villain or otherwise there for nefarious purposes in Babs’ life. I do like when real life stuff happens to superheroes for no reason other than life.

Grotesque as a villain is only mildly interesting. I’m not sure that I want Babs to go after or head-to-head with the Joker so early in this story. I appreciated that in Birds of Prey, Babs went quite a long time before that happened. (Okay, I haven’t read Dixon’s part of it.)

Maybe it’s just one of his Henchmen. That’s I think a better option.

This rotating pencil duty is getting a little draining. Sometimes I think command staff doesn’t fully appreciate having the same artist on the run. Syaf’s pencils aren’t in anyway my favorite. However, they aren’t being made any better by the rotating in and out.

Plot-wise, I loved this different kind of connection Babs makes with Danny. Yes, he’s a villain, and he helped the Joker when he shot and assaulted Babs. That even under that mask, he recognizes her. Which means she did make an impact on him with her attitude. Enough that he called the cops, even knowing about the Joker’s “funny” side.

Interesting story about Babara Sr. and her reasons for leaving being around James Jr. and his mind-control, psycho nature. I can see how Babs is angry that her mom didn’t warn everyone or get him help. But wow, that took a long time for her to get her mind back together. (Poor kitty!)

And poor Alysia getting picked up by James Jr. Don’t talk to creepy men and then accept their coffee invites. Of course, given the other story in this issue, Alysia didn’t seem to have a choice.

Issue #9 and we’re already having to do full Gotham City crossovers in order to encourage readership. Oh, New 52, you were so worth it. Blah. I hate this shit. I makes me so frustrated with comics as rarely as these massive storylines done well.

Plus, we were building on a story, which the only part of it that was added was Babs thinking that Alysia was, once again, out late.

I do like that Simone tried to connect the story and make mass destruction a human story. The story of the young women making killer balloons in the name of imperialism and the talon’s family being a victim of one of those bombs and using the idea on Gotham City.

I just get too cranky with this stuff.