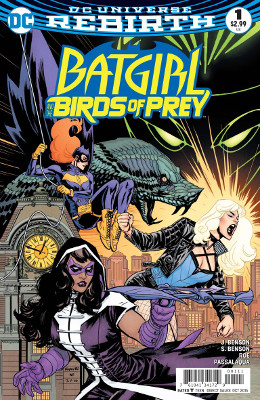 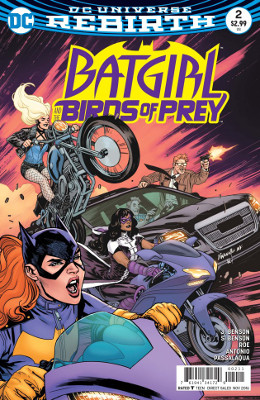 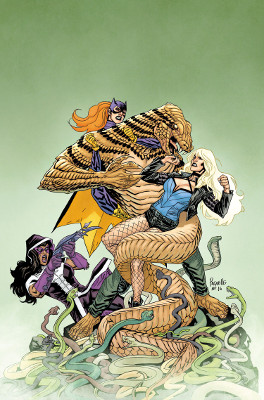 Batgirl and the Birds of Prey #1 by Julie Benson and Shawna Benson
Art: Claire Roe

I kind of love this take on the Huntress the best. She’s Helena all the way. Roe’s drawing of her costume is perhaps my favorite design of all. It’s beautiful, and it makes me want to cosplay Huntress in a way her other outfits haven’t. More Helena all the time. I always kind of liked her when she justifies killing and how she goes about it.

Of course, the mob guy Helena wants to kill is the same one with information about who’s pretending to be Oracle. Or who took on the name.

The Bensons do a good job at reconciling all of Babs’ and Dinah’s various storylines. It still bothers me that The Killing Joke remains canon for Babs’ background, but doesn’t for the Joker. You can’t have it both ways, DC editorial. The Bensons remain true to the friendship forged in trust between the two women, which is the foundation for any good Birds of Prey comic book.

I’m glad to keep reading a book with these three ladies. Especially since the new Batgirl wasn’t to my liking.

Batgirl and the Birds of Prey #2 by Julie Benson and Shawna Benson
Art: Claire Roe and Roge Antonio

I wish that I could say that issue 2 was better. It’s not. It’s much worse. There’s way too much dialog.

I don’t understand why Jim Gordon would work with them. It’s pretty canon that he doesn’t trust Batgirl, and that’s part of the conflict in Batgirl’s identity. It isn’t until he finds out that Babs is Batgirl that they can reconcile this. This is the main father-daughter relationship tension.

Of course, Batman just sneaks in whenever he wants.

The mob-plot is a bit much. And who didn’t see this trap coming. I’m surprised they didn’t do a better job at staking out the place. Or that Babs doesn’t have faster tech.

Batgirl and the Birds of Prey #3 by Julie Benson and Shawna Benson
Art: Claire Roe

I just can’t get into how snipy Dinah and Babs are with Helena and how she acts back. Are they children? Huntress basically throws a temper tantrum and walks out. Sadly, this only exacerbates why I’ve decided this book isn’t for me and that this will be the last issue I read. I’m rather disappointed about the last couple relaunches of Birds of Prey and Rebirth hasn’t made me a fan of any of the BoP titles.

Roe’s art was so hit or miss. I loved the scenes with Dinah as a child: her struggling in foster care and then learning martial arts. Roe’s art was a hit for me there. But in the current world, with the grown up women, and the fight scenes with villains: it was a big miss. Their faces in particular seemed so harsh.

The jokes about Italian mob families liking taco Tuesday and Mexican restruants fell extra flat and borderline offensive. The Bensons took away being different from mob stereotypes by calling it out. You ruined the joke by explaining it. Also, this book’s tone isn’t a joke.

Babs also calling Jim various things and not being able to keep straight what she called him, depending on where she was or if she was in costume seemed off.

Sorry, Batgirl and the Birds of Prey, you just didn’t do it for me.