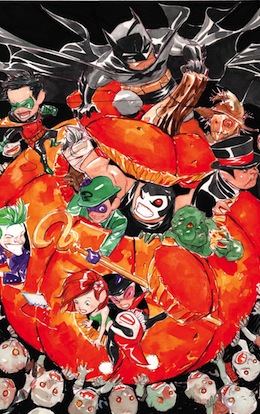 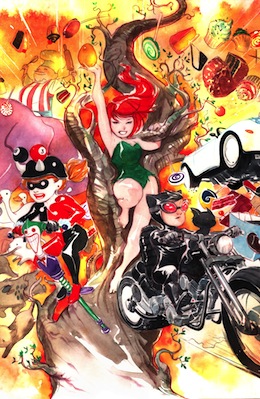 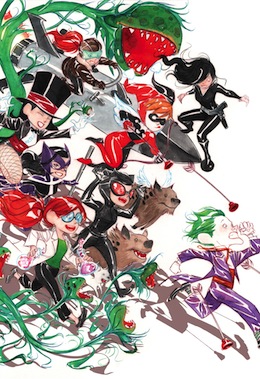 This is just adorable as all get-out. I always love some holiday stories, and Nguyen’s art is just great. I’ve been pinning it all over my superhero Pinterest boards.

I’ve been missing some good Damian snark in my life. Plus, Batman gruff. I love Damian telling Batman all about the times he had with his mom and grandfather raising zombies in the Lazarus Pit. Lol.

Damian immediately thinking the children were villains and not understanding the point of only getting one piece of candy per house were also great. As was Bruce realizing all the real villains were out eating and arranging the cops to pick them up as they left the restaurant.

The Thanksgiving one, however, took the cake for me. I have to agree with Damian: the giant balloons in the parade are silly and eating turkey is just wrong. I love that he rescued one and led them around with his trumpet.

My only complaint is that Batman has so many dark-haired folks, except Babs, in his expanding family that perhaps they needed nametags.

Sadly, pretty light on the Damian. (I’d forgotten that he’d been killed in the mainverse until this issue. I’m so glad that he lives somewhere! And is still being a pain in the butt.) Alfred snarking that Bruce and Damian both need to go to this boys’ school for finishing cracked me up.

Mr. Freeze being psychological changed by the good will from children was a little over-the-top mushy. But it was the Christmas issue. I’m just surprised more of those kids didn’t want to stay in that giant snowglobe, once Nightwing figured out there was a door to let them safely out.

The New Year’s story with Catwoman, Poison Ivy, and Harley was definitely my very favorite. I just love those three ladies getting into all sorts of trouble. Especially since both Selena and Ivy are very motivated by “good causes” to be villains.

Catwoman trying to make her resolution to Batman and for the year to be good was cute. Just in time for the ladies to crash it.

All their expressions and all their “missions” were perfectly them. Love that Selena deters them from stealing from Bruce, who she knows is actually Batman. That would’ve gotten her into trouble big time.

Continuing to be exra, extra adorable, I love this book. The Joker accidently puts a love potion on himself and finds all the ladies of Gotham chasing after him and his affections. It reminds me a lot of “Bewitched, Bothered and Bewildered.” Only with a direct villain.

And of course, Harley’s not happy about what happens in the end.

Alfred taking Damian to be trained by Katana, ftw. Also more backstory about how kick ass Alfred actually is. I thought I was going to like the Valentine’s Day story the most, but this one’s even better.

You’d think that Damian would know not to underestimate someone because of gender. His mom was a pretty killer lady.

“I always just assume he was born in that cave, trained by …bat …men?” Classic.

Love that it’s the “old guys” who go after the Blade of the Jade Serpent. But mostly adore that it tells the story of Damien’s family on Chinese New Year’s.

Join in the fun and buy Batman: Li’l Gotham Vol. 1