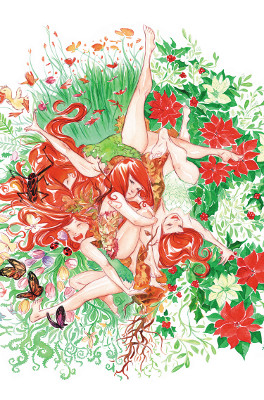 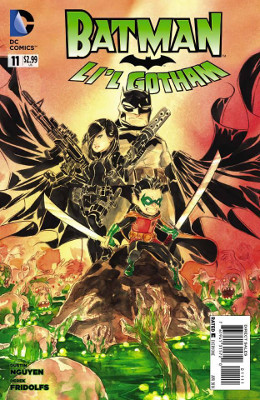 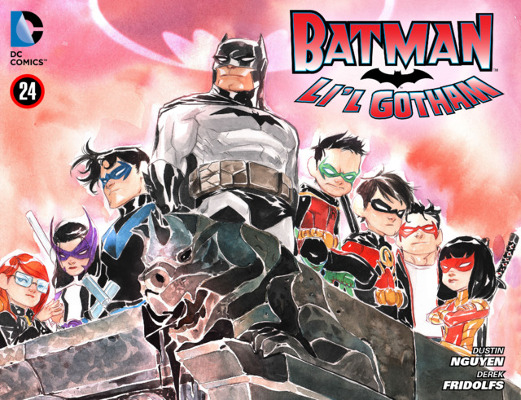 Poor Ivy just had a hard time adjusting to fall. I really enjoyed this story because it showed how Harley and Selena do care about Ivy, and how they band together when they need each other.

The Joker’s little rant about being in charge was cute. Because at least here, Harley rules the roost. Though perhaps she should’ve given him a little more instruction on how to cheer Ivy up.

I loved the changing of Ivy’s costume with the season. It felt true to the story. And of course, Joker reminding Ivy of all the plant murder that happens in fall to put her on the warpath instead of just moping around.

Loved how the second story was all about how Damian has an overactive imagination and how he’s really just a kid. Of course, Alfred was just storing the extra holiday decorations. And Jason completely led Damian, Katana, and Tim on so that he didn’t have to do organizational duties.

My favorite “the butler did it” was the one where Alfred raise Bruce to be Batman, and it was all a long-time plot by him. Cute.

I feel as though this book’s foundering a bit, and perhaps, it should be a bi-monthly book. It seems to me like out of the two stories in each book, recently, one story will be incredibly strong and the other will be weaker.

In this issue, I really loved the All Saint’s Day tale. It worked perfectly to have Damian watching zombie movies and then taking him to visit his mother, only to be attacked by zombies there. I loved the use of characters here from Azrael and Man-Bat to Talia and Batman. Everything was just fantastical enough to be awesome, but not too far out of the normal.

Damian riding Man-Bat was just fantastic. Pretty much every kid’s dream (and maybe mine too). It also brought fun into the zombie battle, and it made sure that Damian was never directly in any harm’s way. Which I think is a big plus in this story since we’re supposed to be living these adventures from Damian’s point-of-view.

Of course, that’s what perhaps makes the tale of the Clock King not work very well. Damian wasn’t even in the story, and it was confusing. Somehow when the Clock King stopped time, he ended up merging dimensions. I get that Nguyen and Fridolfs were probably eager to play around with Dracula Batman and all those other Batman variations from other dimensions, but they just didn’t work well here. The story felt very muddled.

This book has come to an end and that makes me very sad. I’ll miss having a title that showed so much glee into the world of Batman. Also Jerry!

I loved Damian dealing with a “normal” problem — his pet running away. Which, of course, turned out to be a villain. Because it’s Batman after all.

The Condiment King is horrible. Horrible in that super cheesy way that harkens back to very old Batman comics. And clearly, it’s some commentary on McDonalds, or at least their caricatures.

It was pretty much the best that the Condiment King was taken out by Jerry and a boiling pot of hot water.

The second story was very sweet and a great wrap-up to the series. I love the family aspect and Damian learning all about his new family. It’s super cute that Alfred uses his stealth to take photos of everyone. It’s warm and full of heart. I will miss this in my pull list.