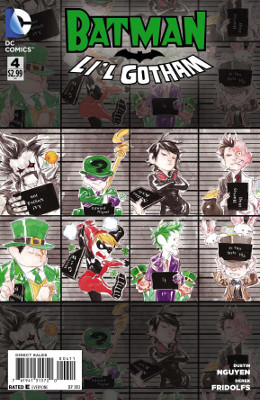 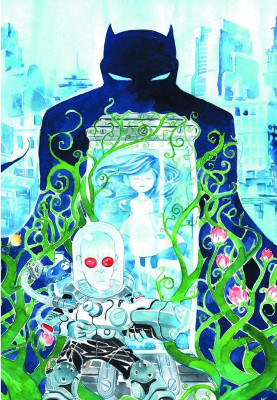 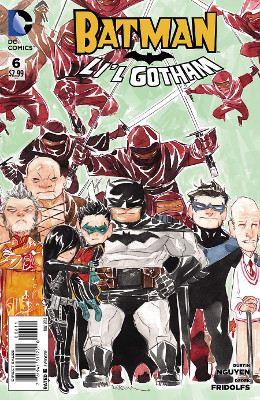 This issue was cute, but it wasn’t as witty as the other ones.

There’s a villain on the loose who’s blaming all the crimes on the other villains. Seems like a banner day for Damian and Batman as they lock all the criminals up. Turns out it’s the Riddler. Which was perhaps the easiest guess ever.

The best part was when Batman accused Catwoman of robbing the bank. Then he looked into her bag and all she had was cat food. Cute.

I find it weird that Batman would let Damian play video games in the Batcave. Unlucky for him, the Mad Hatter hacked it. Seems pretty technologically savvy for him.

The romp through the tea party was okay. The best part was Damian looking for the bomb among the easter eggs and stealing all the eggs from the other children. He looked like a selfish kid, grabbing all the goodies for himself. Which is pretty par-for-the-course with him.

Mr. Freeze just can’t catch a break in this one. I’ve always wondered why exactly they let anyone out of Arkham Asylum. I do love how happy he is, for a few moments. And the irony of all the green after his ice is melted and Ivy getting into trouble for all the plant growth.

The Cinco de Mayo story was pretty cute. I’m glad to see that Katana and Damian are getting into trouble together, and apparently, they’ve added a friend named Colin, whose power is to grow into a big guy. (I don’t recall Colin from any other comic books.)

Of course, Bane would challenge them to a fight and not know who they are. I’m glad that someone in comic book writing remembers that Bane’s Hispanic.

It was too cute when Bane and Colin take a break from fighting for horchata. (Which are super delicious, but sadly, I cannot drink it due to allergies.) And that Batman, Tim, Huntress, and Zatanna are playing scrabble while Dick and Babs go out on not a date. 🙂

Of course, the best is that Katana makes everyone pass out in food comas from tacos. Mmmm…tacos.

This continues to be adorable, which is probably what I’ll say about every issue.

The Mother’s Day story was better than the Father’s Day story. I enjoyed Damian helping out Colin to try to find out who his mother is. But that Colin also ends the story by giving flowers to the nuns who raised him.

It was also cute that Batman invited Talia to spend some time with Damian. Who just spent time assuring Colin that his mom couldn’t be any worse than Damian’s.

The Father’s Day story was a bit bleh. While it’s unsurprising that the Batboys and Batmen can’t cook, it just lacked the bonding of the other ones. And no one is going to kill the pet turkey!

I also found it a bit off that Jim wouldn’t arrest Talia and Ra’s on the spot. They are known, wanted criminals. I do like Babs being the one to discover the ninjas and start the fight.

Join in the cuteness and buy Batman: Li’l Gotham Vol. 1