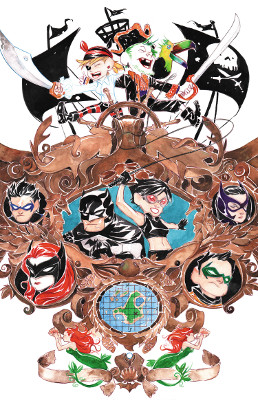 Someone clearly watched too much Pacific Rim and decided to do this Aquaman story. I’m glad that there were the obligatory fish jokes from Batman. The best was that he was eating fish when Aquaman called.

I also loved that Babs was the one who really knew how to control the mechs, not Damian. Despite what he thinks. The end with him surrounded by school girls was pretty cute.

The Fourth of July one was okay. I think it’s hard to do a kids’ story with the Joker. He’s a nasty villain. Cute irony that the Joker and Damian were getting into trouble for doing the same thing. Liked the ending with Harley getting too excited about sparklers in Arkham.

Kind of surprised to see Rocket Roxy in this universe. Killer Croc and the taffy also didn’t quite fit; it was cute, but I’ve just read too much Killer Croc being extra violent and scary.

Probably one of the best issues in a while. Batman and Catwoman go on vacation (forced by Alfred), and Damian thinks he’s left in charge. I kind of love how in this book, Damian goes around telling everyone that his dad is Batman. So stealthy. My only complaint is that they should’ve used Batwoman more.

I love how many references there were to other Batman stories in the vacation section. There was when Bane broke Batman’s back and when he traveled through time in Morrison’s run. And then my favorite, which was a call back to the shark repellent in the old Batman movie.

It was cute that Joker and Harley also got kidnapped by the pirates. A pirate who stole the Joker’s style.

If it was anyone, but Selena, I might flinched at her extra tons of bags and then her making Bruce take her shopping. But I’m cool.

Damian created the Nest was cute. Especially since it was a ballpit. And basically throwing a party with all adults, since he only knows adults. (Well, I’m not sure how old Tim and Katana are supposed to be…)

Still confused by Dove being a man in the New 52.

I love that Damian just brings home all the pets. Whale!

This was probably the weakest issue of Batman: Li’l Gotham so far. In that, going to convention stories always seem too obvious for comic creators and the story of Jenna Duffy was just meh.

My favorite part of the convention story was Damian coming back covered in swag and Batman being like “WTF.” And Damian complaining that they only gave him XXL t-shirts. This is me every convention.

Damian’s plan to get Clayface to come out was pretty clever. I like when they play on the human emotions, like vanity, as it adds greater depth to the villains. Plus, you know, helps keep this book very PG.

The only real thing I enjoyed about Jenna’s story was that Jenna was a woman. Carpenters, and general employees of villains who aren’t waitresses, aren’t often portrayed by women in general. So thanks, Nguyen and Fridolfs, for doing this little nod.

While it’s realistic that with all the structural damage that fighting does you need someone to fix it, I’ve always been okay handwaving who actually does the work. In that vein, Jenna would need a bigger business than just her. So if we’re going to be realistic…we should be that.