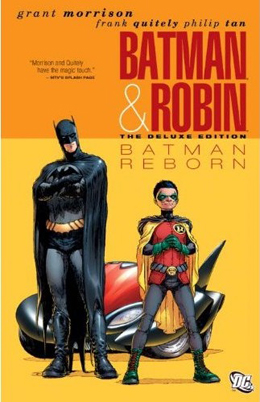 I enjoyed this book much more as a study in how Dick and Damien are compared to who Bruce and other Robins have been in the past. I also liked it as a comparison of Dick and Jason and the possibility of what kind of psycho one can be: Damien or Scarlet. And who finds true redemption and goodness in the end.

What I disliked was the villains: Professor Pyg and the Flamingo. I’m not sure what Morrison’s obsessions with ripping off faces to either transplant new ones or eat them. Actually, I do know. Since this is all about identity, faces are the main source of identity, and well, I’m just not enthralled.

I expected the villains to be deeper than they are written. Professor Pyg rather reminded me a little too much of The Twilight Zone episode where the person has surgery to fix his face to make it that of a pig. Pyg seems to have no motivation to make his doll-people besides that he wants mindless automatons to do his bidding.

The Flamingo seems to be nothing more than an over-the-top gross villain who would make other bad guys shake in their boots. I’m really freaking glad that despite his flamboyant appearance that Morrison decided not to make him gay. And yeah, Jason kills him at the end, but I somehow doubt that anyone cares.

I’m also not a fan of Quitely’s art, but I’m not going to focus that because it’s pretty much a broken record of not liking oddly wrinkled faces and weirdly-shaped heads.

On the other hand, I do love the character bits that Morrison creates for Dick, Jason, Damien, and Scarlet.

The very first scene with Dick and Damien in the car sets the tone perfectly in that it mirrors (I’m sure on purpose) the infamous scene from Frank Miller’s All-Star Batman and Robin where Bruce basically tells Dick to shut the hell up because he’s the “goddamn Batman.” Instead, here we have Batman apologizing to Robin for ever doubting him. Morrison says in his notes that he was trying to flip Batman and Robin around, making Robin the dark one instead of Batman; but I feel like depths of darkness can only go so far when the dark one in question is only 10-years-old. Raised by assassins or not.

One of my other favorite moments was the scene on the rooftop where Jim Gordon and the cops meet the new Batman and Robin for the first time. The comment about them being shorter and not quite the same was some excellent metatext.

I like that Damien fails to save Scarlet when he promises her he will, and that he actually feels bad about it. This seems to be a huge first step for his character. Beyond just wanting to be his dad. (Though I will say that I prefer the snarkier Damien that Bryan Q. Miller writes.)

I loved the line from Jason about being a ginger and how Bruce made him dye his hair to be the same color as Dick’s. Because yes, Morrison just nails this tiny little detail about something Bruce would so do, and it really describes the type of Batman Bruce was perfectly.

I also liked the idea that Dick and Scarlet and then Jason and Damien teamed up would be a far more effective pair. Yes, Scarlet has some of the same issues about being let down by Batman as Jason, but it’s clear she is not 100% behind his method of killing. Likewise, Dick often has to stop Damien from killing or permanently maiming villains; whereas if he teamed up with Jason, they could kill as many bad guys as possible. No more Batman rule.

Dick’s moments with Alfred really brought out who he is, how much he wants Damien to succeed and how stressed he is about living up to Bruce’s legacy. And also when he was protecting the Penguin from Jason.

But perhaps my favorite scene was Scarlet leaving Gotham. Was the disfigured mask that was put over her face falling off and her getting the hell out of Gotham. Despite her stint as a anti-hero, she’s had enough, and her mask is done. Whereas Jason, Dick, and Damien were all raised to be masks, raised by masks.

I feel like as I review this book, I liked it more than my stars suggest. Morrison as a writer gives a reviewer a lot to talk about, and he delivers scenes in the same way Joss Whedon delivers some of the best one liners. However, as a comic book reader, when I closed Batman & Robin: Batman Reborn, I felt part of the story was missing. Like there should’ve been more, but at the same time, I wasn’t as excited about the next volume in the series as I should be. In a way, it was like some of the books I read in college which made great subjects for papers, but not ones I wanted to read sequels to or pick up other books by the same author.