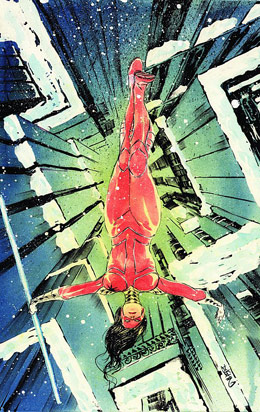 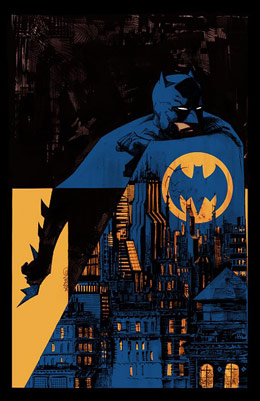 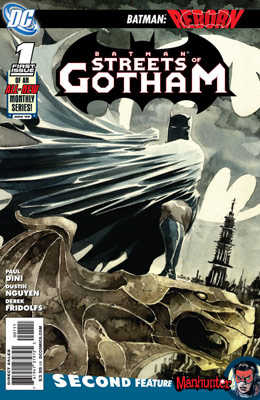 Yep, sadly disappointed at Dini’s return. Seriously, I bet the only reason for the awesome Manhunter cover was some editor begging Dini not to put Humpty-Santa on the cover.

I’m not sure how the reveal that Humpty’s stealing toys and fixing the ones broke in the process for dead children’s supposed to be ironic or sad or darkly humorous. Humpty is sad; Dick is all ironic acting; and Damien is part wise cracking and part throwing up.

At least this issue serves to move the plot further along.

Oh, Dylan. He kind of deserves to have his leg seared off at the knee by Kate. I just love how scared he still is of her. Like losing his leg wasn’t anything compared to whatelse Kate’s going to do to him.

I loved her covering Dylan’s butt and pretending that he’s an informant for her to Jim and Maggie. Their involvement here has been excellent.

Nice to see Kate ready to kill Two-Face. She doesn’t hold back in either of her professions. Of course, here comes Batman to stop her. Damn, Batman Rule.

The one decent thing about this comic was the art. Nguyen definitely has a unique style, and it works pretty well with a Bat-comic. Lots of big shadows and all.

However, the story is epically bad. It felt so, oh what’s the word, inappropriate. Also outdated and offensive. It’s not the early 90’s anymore, Dick would not be referring to Pamela Anderson as a babe. (Even if Benson seems to think she is.) Also, what’s up with Dick’s shaggy hair?

Likewise, Benson seems to have a very juvenile fascination with sex/bdsm clubs and hookers. Which makes Dick’s entire trip there like a very bad caricature. Ugh, the only reason this comic’s still on my pull list is because of the awesome backup story.

Of course, Batman was going to stop Kate from killing Two-Face. You can almost hear the ‘no, you can’t kill a major Batman villian’ in there.

Kate’s passion, both as Manhunter and as D.A., is certainly going to be her undoing in Gotham City. Either she’s going to have a fall and almost die, or she’s going to go through a every dark, tunnel vision period where she forgets about the rest of her life. And then Ramsey’s going to sneak on a bus from L.A. to Gotham. Andreyko definitely can’t leave Ramsey’s powers alone.

I’m interested to see what Two-Face has over Jane Doe.

I seriously paid $3.99 to read this crap? (Okay, I actually pick up this comic for the second feature of Manhunter.) But still, this story was dreck.

First, Benson doesn’t understand Batman at all. Batman believes in justice and reforming people. He follows the law. This is the reason all his villains are still alive and kicking in Arkham Asylum. Batman doesn’t for two issues tell people they gave up their rights when they started killing people and then slam their heads into an interrogation table. Pretty sure, Batman is getting extra-special privilege from Gordon to be in the police interrogation cell, and he certainly isn’t going to torture someone just to get a confession.

Second, Benson basically wrote a plot where two exceedingly privileged men (Dick Grayson and Jim Gordon) save a hooker from her two abusive boyfriends and one stalker turned jealous murderer, and then they pay for her bus ticket out of Gotham City and back to her small town life as a nice girl. Not only did they continually use her as bait, but Batman has to argue with Jim about how they need to let her go — instead of charging her with prostitution and robbery — so they can catch the killer, who she’s causing to kill people in a jealous rage.

Oh, Manhunter, how you make everything better. Seriously, I love Manhunter so much, but I’m afraid I just might have to hope it all gets collected and/or start picking up this title in quarter bins.

I really enjoy Andreyko playing up the lawyer side of Harvey Dent here. Him representing himself in the case Kate’s brought up against him works really well at showing Kate’s direct frustrations with him. Plus, it allows Harvey to be snarkier in court. Also, there’s a nice look into the Gotham justice system as Kate sees Judge Van Dyke favor Harvey (who he knows) over her.

Oh, Ramsey riding the rails to Gotham City with Thor.

Dylan is so trying to make nice with Kate. Promising her all those new toys and the secret blue-prints to Harvey’s lairs. He also makes a great comedy relief in the sometimes far too heavy-handed and dire Gotham City.

On a side art note, I am not a fan of how Haun draws Huntress’ costume. Yeah, it’s the stomach show-all costume, but seriously she’d need a Brazilian to wear his version.

Note: I’ve decided to take this title off my pull list. The Manhunter second feature will be collected into trade this fall, and I’ll be buying that then. The main title is so awful, I can’t afford to keep this on my list.