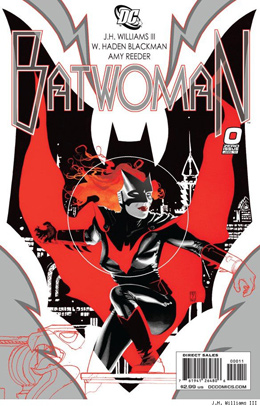 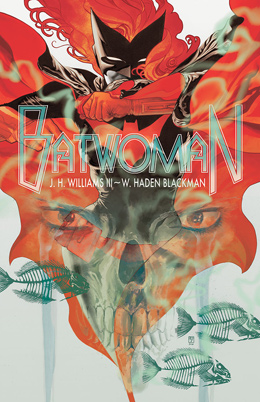 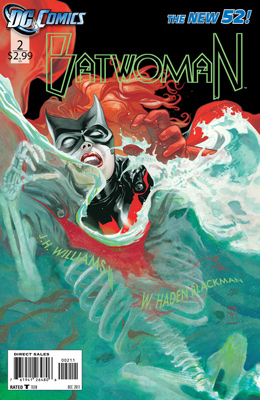 I love Batwoman; there is no doubt about that. And it wasn’t that I didn’t enjoy this story, it’s just that it was in no way a complete issue. It was like a sampler. It was a poem about Kate, not a story. It was an introduction, and no letting me learn anything about her that I already did not know.

I’m not thrilled that DC charged $3 for this either. (Then giving it out at comic book shows for free…)

I want. I wanted so much more than this.

I’ll still be waiting for issue #1.

Much to no one’s surprise, I loved this book. This book made me not care about anything else happening in the DC universe. (Also, clearly, this book is not set in the “new” world. But I’m not complaining about that. (ETA: Apparently, different books are set in different timelines in the new DCU, and this one is set later. Because that makes things so incredibly seamless for new readers, DC. NOT.))

I will say the one thing I hate: that Renee’s photo is up on the wall of dead cops. She better be either a) undercover or b) doing a complete Question-origin story including death. Though Maggie’s line about knowing that Renee and Kate dated seems to me like Maggie’s also going to figure out that Kate’s Batwoman.

Besides that, I’m really happy with the story. I love that Kate is continuing to see Maggie, even if some of her motivation is to get information about what’s happening with the missing children.

I love Bette being Kate’s trainee. Especially that Kate tossed out the Flamebird costume. I also love that despite not knowing what went on concerning Alice and Jake, Bette is pushing for Kate to fix her relationship with her father. Fangirl time: I am so glad that these plotlines are not being thrown out with the bathwater!

I’m kind of excited that Cameron and Bones are going to try to recruit Kate. (I do hope that at some point Williams and Blackman address the repeal of Don’t Ask, Don’t Tell considering it’s so centric to Kate’s story.)

Williams’ art is stunning as always. I continue to adore the contrast when Kate goes from Batwoman to her civies. And Bette’s costume is super ugly, but practical.

When I read this comic book, I sometimes think that I should just cancel the rest of my pull list. (Then I remember that I need to give new comic books a chance, and blah blah blah.)

Anyway, I love that Cameron thinks that Maggie might be Batwoman. And while I get that Bats = Gotham City, if Maggie was Batwoman, there’s no real reason she couldn’t have remained in Metropolis. (Plus, everyone knows that Superman is nicer than Batman to deal with.) I’m interested to see how Cameron’s characterized here considering the only comic I’ve read with her was Manhunter where she really became Kate Spencer’s best friend and Dylan’s girlfriend, and she’s a little less of a woman-in-black/fed there.

I’m curious to see what Kate chooses concerning Batman’s offer. Interesting parallel of choices as Kate tells Bette she has to choose between her and Jake and Batman tells Kate she must choose and how both of them say that the offer’s only on the table for a short while. I kind of hope that Kate doesn’t go with Batman.

I loved Maggie catching Batwoman breaking into the station for more evidence. Because Maggie is going to figure out Batwoman’s identity sooner or later. (Not being very good at hiding one’s secret identity seems to be a theme in the new DCU.) And it’s going to be heartbreakingly awesome. Especially since Maggie and Kate’s date could be viewed at Kate trying to get information out of Maggie about the murders.

Loved Kate speculating about her life being like a horror flick and going into danger by herself only to get sucked under.