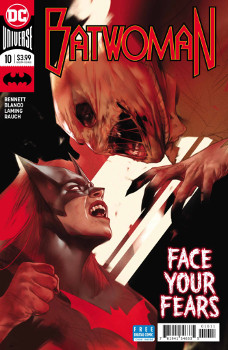 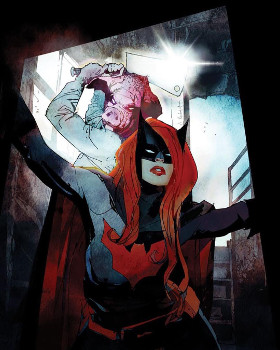 Funny story, I never got issue #9. When I read issue #10, I couldn’t really tell the difference about not getting issue #9. This makes me not inclined to figure out why it never got put in my box at my local comic book store. (Except that I’ve had at least 15 missing comics in the last several months, and I’m starting to get super pissed about it.) I have no real interest in going back since this Scarecrow plotline doesn’t amuse me.

I think there was a little bit with this commander bro Prime and Fatima that I missed. But wow, I just…

Kate believes herself to become a rabid bat. The same way the foxes got some disease that drove them wild. So has the Scarecrow toxin drove her mad.

Of course, Scarecrow himself was never very careful about his potions not affecting himself. This is always his downfall. It’s unsurprising that Kate got the better of him. Beyond her being the hero here.

Since the start, I’ve called out that Safiyah is still alive and likely working for the Many Arms of Death. So this confirmation that she was 1) there and 2) it wasn’t a shock that she was instrumental in blocking Kate from killing/stopping Fatima.

Though it is interesting to see Bennett play with a queer version of Beauty and the Beast in getting Kate back to herself from Scarecrow’s hallucinogens. The roses were a nice touch there.

I absolutely hated Kate’s interactions and arguments with her father Jacob. I get that he’s supposed to be on a opposite side of Batman and that he sees the world as black and white, and that he’s definitely going to be our big villain… But this lacks nuance of the richness of her relationship with him.

This makes me think that Beth is actually back in Gotham.

Not sure why Bennett is off the book. It seems like once again, we’re going to have a tale where Kate goes after Beth/Alice. Is this the only plot that writers can find for Batwoman? Can’t we move Beth/Alice beyond this?

I’m not a Professor Pyg fan. I wrote about him in my review of Morrison’s Batman & Robin. He’s unnecessarily gross.

I did appreciate that Perkins portrays Kate as a detective. In the way typically the bat-family has been approached. Due to Kate’s soldier background, usually she’s treated more in that vein.

Seems like Kate would’ve dug up some secrets that Julia had been keeping while sorting through her stuff. Missed opportunity there.

As stated previously, my adventures with Batwoman are ending here as this title has been too hit or miss. It isn’t telling me new or coherent stories. Kate deserves better. I know I could continue with Perkins and see if a new writer takes her story in a new direction, but I’m fatigued.