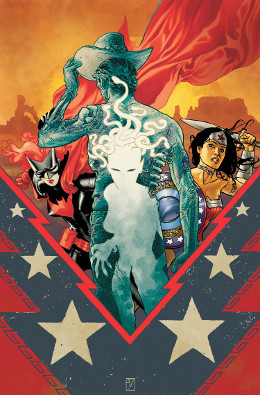 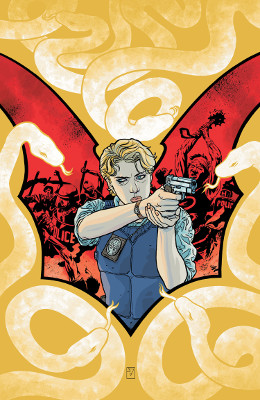 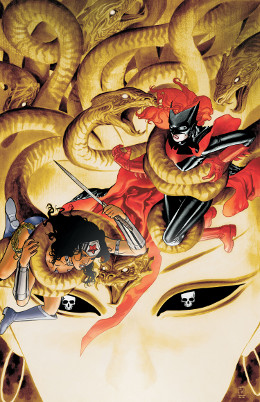 This comic is just so good. I love that Wonder Woman mercy killed Pegasus, all the while as she doubted herself. And the clinical way that Kate looked at Pegasus’ wounds served as an interesting way to recap his fight against Falchion without showing it, and it showcased Kate’s medical knowledge of fight wounds.

The part where Kate wishes for telepathy so she can tell someone about her fighting side-by-side with Wonder Woman to take down Medusa was too cute. Especially when she said that she wanted that person to be Maggie.

Oh, I think that Maggie will be finding out about Batwoman sooner rather than later. Which I’m going to love because, of course, you want to tell your partner what’s going on in your life. Even more so when you’re teaming up with Wonder Woman.

I’m glad that Maggie realizes Medusa’s powers quickly. Killer Croc’s transformation was pretty gross. And Harvey’s glee at Batwoman and Wonder Woman joining the fight was quite delightful, especially for him.

Oh, Maggie, she’s just so intensely amazing. Also I kind of think that perhaps they write a better Maggie than Kate. Perhaps that’s just because Kate’s a more established character than Maggie. Even if Maggie’s been around longer.

Guh. Maggie walking into the Catholic Church and remembering the abuse she received at the hands of her father because of being gay was all too perfect. And the tying together of her concussion, saving Felipe, and being unsure if she’ll ever bring the children, who are in chains, home safely just really worked for the entire situation. Not to mention Felipe forgiving Maria for being a monster.

And the end note where Maggie’s hopeful that Kate isn’t caught in the mess is priceless.

This big battle makes me very happy, and it’s narrated exactly how it should be. Plus, Williams’ art accompanies the motion and the chaos beautifully. I approve on all sides.

Love how it opens with Maggie yelling at an overwhelmed Batwoman to get back out on the field and worry about civilians. And Kate thinking about how much she’s missed Maggie’s voice.

Yes, the Medusa and her crew destroying Kate’s apartment building makes that very, very personal. I love Wonder Woman reminding her to stay focused on saving the children, the original mission of everything.

Glad to see Abbott and his crew helping out. That monsters can turn against the “mother of all monsters,” Ceto. I just worry that the police and DEO might start shooting the wrong creatures.

Bones cracks me up. And yes, that’s exactly what would happen to him in a fight.

While I think Wonder Woman is twenty times more awesome than Superman, I do appreciate that she realizes she could take down the hydra/Killer Croc a lot quicker if she’d had Superman’s powers. But she’s very inventive and amazing.

The return of Flamebird! Of course, Jake sends her out to kill the butcher than almost destroyed her.