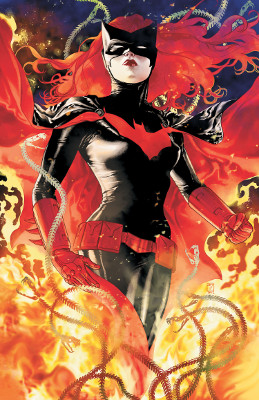 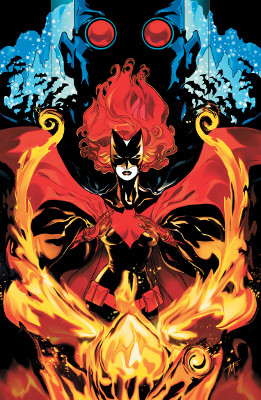 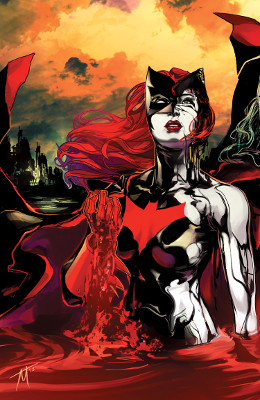 I completely squeed at the end of this issue. Yep, between Kate revealing herself as Batwoman to Maggie — which I’ve been championing — and asking her to marry her, lots of squee-worthy awesome. And that’s not even mentioning the reveal of who’s still alive. I am one happy fangirl.

Of course, this issue got off on a great foot with me as I love the cover. It’s so Kate. She’s strong and defiant. And she’s starting to get the seasoned superhero pose of awesome. Guh. I love it.

Bette as Hawkfire is just great. The cool understanding between her and Kate works perfectly in this situation. As if they all don’t know each other.

Poor Abbott. I’m going to miss him and his misfits. But I’m glad to see that Wonder Woman will be taking Ceto and any of the monsters to a safe place. I kind of adore that Kate came up with that idea when Diana was ready to kill Ceto. It’s more a Wonder Woman-like solution than Diana’s first impulse.

The DEO may have Alice. But I don’t think Kate’s going to be easily swayed from walking away. Especially given how things played out with Chase in this battle.

Loved Kate bringing all the children directly to Maggie. Beautiful.

Nice to see Kate and Bette teaming up. I love the contrast of Bette having Jake in her ear and Kate having Chase. Except, of course, that no one knows about Chase and the DEO’s blackmailing of Kate.

Loved when Batman showed up and Kate started yelling at him. I like that Kate was able to have her own big battle in Gotham City; while at the same time, everyone still wondering just where the hell Batman was.

Kate did the best she could by destroying Mr. Freeze’s gun. Though that just means they’re going to unveil Alice sooner.

Maggie house hunting for them was adorable. I love how she seems somewhat settled that Kate is Batwoman and accepting of their different lives.

This was pretty much an issue where I was like “Batwoman, fuck yeah.”

I love that McCarthy is apparently going to the school for artists by Williams. It’s brought such a wonderful cohesion to this book and upped the art level in DC’s title by like 1000%. If only they’d make their other titles more art-minded.

I adore some Cameron backstory and her visit with her sister, Terry. They are so very different in appearance, but completely cut from the same cloth. Interesting to see that both Kate and Cameron are being propelled through life by actions of their father’s.

I can get behind way more Kate and Maggie domesticity. Even if it involves talks about the Scarecrow formula. Maggie’s explanation of how she felt about the entire thing was perfect.

Catherine is awesome. I love her forcing Jake to tell her everything and completely calling him out on his bullshit. Now I want to know more about this possible son and who this other Kane child could be.

Cameron’s warning about how fucked up she found the situation seemed to be more ass covered with Kate, even if it was how she felt. Oooh, Alice, how I do love thee.