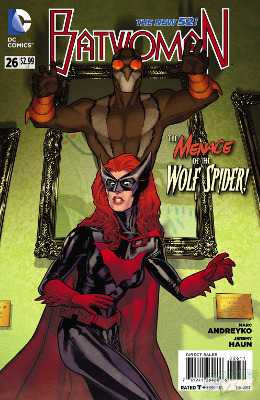 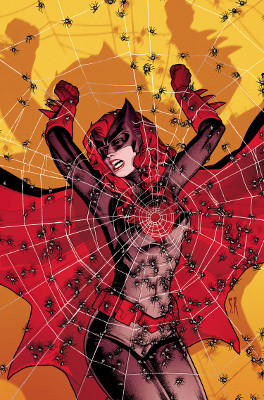 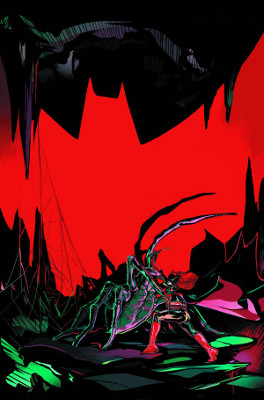 Okay, I really hope this annual that’s coming out in April will clear up the huge dangling plot that DC editorial decided to leave wide open. I hope that’s what obviousness Andreyko was hinting at in Bette’s dialog.

Love it when Kate goes out in society and plays party girl a bit. Well, respectable engaged to the police chief party girl anyway. That Kate and Bette both immediately go home and put on their suits to fight crime is perfect.

I’m betting that Evan is the art thief. They were both a little flamboyant in the same way, and Evan’s an Olympian. Plus, it’s odd that Evan never showed up or one of the women didn’t go looking for him. Of course, why would he trip his own alarm?

Even though Andreyko loves himself some true love, I’m going to take it given DC editorial’s stance that Maggie and Kate will have to break up before any wedding bells in their future.

I really hated the first page of this comic book. Batwoman’s falling from a very high building and losing consciousness. Except that she’s in a position that it looks like someone could be on top of her having sex with her. So I’ve never fallen from a building; however, I have gone indoor skydiving, and with the g-forces, it’s hard enough to bend your legs (like you’re supposed to), but even harder to get that kind of pelvic tilt that says “stick something in my vagina.”

I appreciate Batwoman’s hallucination in that it tells us Andreyko won’t be abandoning Batwoman’s history. Of course, he’d have something like zero subscribers if he did. This is an uphill battle. That said, the J.H. Williams III-lite art didn’t do a thing for me except make me a little sad.

The mystery here hasn’t grabbed me. But I am excited that Jamie is back in Maggie’s life, and of course, she walks in on Kate all beat up and bleeding with trails of her Batwoman costume. This was my favorite part because that’s completely what would happen.

I’m actually enjoying Haun’s art quite a bit. I’m digging how he’s drawing Maggie’s hair. She’s needed a bit of an update, and I’m always appreciative of an artist who can draw hair styles subtly different in ways that reflect current styles. I also dig that while Kate’s still pale, she isn’t the albino chick with red hair that she once was.

You’d think that Bette would call her on her cellphone if she was really worried that Kate didn’t make it out of the fight with the Wolf Spider.

Evan is definitely the Wolf Spider. Easiest mystery to solve. What I didn’t expect is that he’s some kind of thug for hire. Or art thief for hire. Or maybe just thief of rich people’s things for hire.

I liked the adult tension Andreyko brought to Maggie and Kate’s relationship. When Kate assumed that Maggie was dumping her, it seemed like the right reaction. Seemed like something that would happen in comic books with the big speech about Kate’s life being too dangerous. I didn’t see Maggie pulling out a therapist’s number and recommending that Kate go see him.

I like that Kate’s not great with children, but she’s not horrible with Jamie either. It’s a nice balance of someone who’s okay with their partner’s children. But Andreyko is always great about writing children.