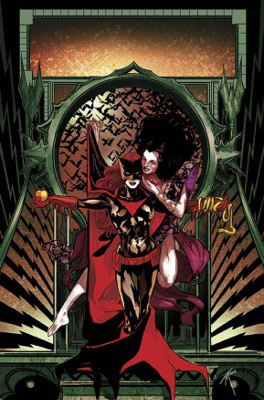 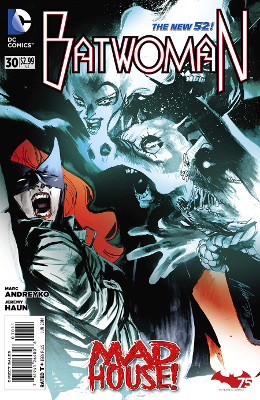 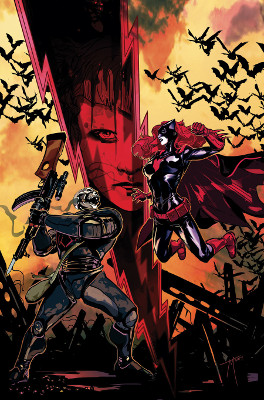 I’ve liked Andreyko’s writing in the past a lot. If he has one writing flaw, it’s that he takes a while to really get to the meat of the story. (As a vegetarian, I need to get a new metaphor.) I love his stories once they’ve taken shape and he’s created a full world, but he takes time to get there. And in the modern bang-boom of canceling comic book series, very few runs even make it longer than one year.

So I’m trying to dig the whole Kate goes to therapy plot. I’m trying to get into this being the way the Andreyko can work with an established character and get through the stuff that we fans needs to digest. And who didn’t almost stand up and applaud Maggie for suggesting and forcing therapy?

I was, however, horribly distracted during the therapist art because of the weird faces. The art just wasn’t up to quality. Which is super hard given that Batwoman’s entire existence has basically had the most fabulous art that you could ever want. Ever.

The Wolf Spider story bothers me. I really want a very good reason why he can best Kate when they fight. And I saw the release of all the prisoners from Arkham so he could escape coming. I guess that we were supposed to guess that the Wolf Spider is our friend Eddie because, being gay, he would be immune to Nocturna. Or the woman I assume is Nocturna, since they made such a big deal on the cover, but the story had nothing really to do with her.

Let me also guess now that Mr. Grantham has a hidden fortune with a map on the back of those paintings that are otherwise not very valuable.

Yeah, so Nocturna was pretty anti-climatic. Batwoman’s still focused on the Wolf Spider, and I’m pretty sure she didn’t really notice that Nocturna also escaped.

The rag-tag D-listers in Arkham were pretty much rag-tag. The cockroach guy reminded me of the maggot assassin from Buffy.

Maybe the Wolf Spider is this painter fellow. I mean if Mr. Grantham is like 100+ years old and looks maybe 60, it could happen. Just seems like it wouldn’t match the early cookie crumbs.

Of course, Maggie’s ex is suing her for full custody of their daughter. Who didn’t see that coming?

While I’m very happy this storyline got some kind of resolution, it wasn’t smooth and some of it was very forced. Of course, the entire circumstances behind Williams and Blackman being removed from Batwoman was fucked up, so in some ways it’s surprising the DC editorial even let Andreyko tie up the plot. The plot that “ended” right in the middle of intense action. (Like seriously, it would’ve needed maybe one more issue to arrive at some conclusion.)

I think it’s convenient to just write off Bones as some sociopath with daddy issues. Also convenient in that Jake had admitted that he had a son before Beth and Kate. But that son’s apparently not Bones. I probably have more respect for the outcome because I’ve read other Bones’ stories penned by Andreyko, but I imagine that others haven’t been so nice.

My biggest complaint about the story is Moritat’s art. This is, I believe, the first time we’ve seen some full-on ridiculous cheesecake. Alice is wearing DEO prison clothing and in shackles, but she can still have her prison jumpsuit buttoned-down and poised to show off her cleavage. It’s bad enough she’s a caricature of herself. (Almost as if her insanity has been pared down to make it okay that Jake takes her away from Gotham to his own private island to get her treatment.) Why? Why? This is the type of sexist bullshit that fans of Batwoman from the very beginning have been worried about. Especially since Andreyko does not have enough clout to be able to yell at an artist to change it or else.

I guess eventually all characters in Gotham, if they don’t want to be labeled baddies and end up in Arkham, must make amends and “friends” with Batman. It was very Batman to be like “I untied myself a long time ago, just didn’t let you know.” I surprisingly enjoyed Batman and Batwoman’s interactions and team-up here.

I can’t really see Chase going back to being a private detective. It seems like she’d be too used to having all the latest government toys that she’d be a little bored by that sort of work. But Andreyko does like to tie everything up with a bow. And I do appreciate that he wants to be able to give some kind of closure to Batwoman fans.

Get some closure with Batwoman and buy Batwoman Vol. 5: Webs