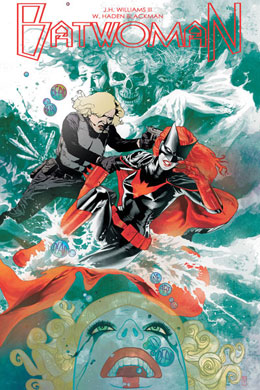 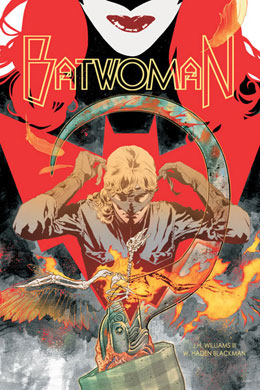 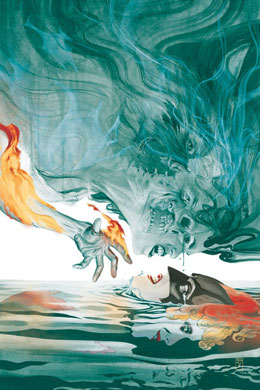 Damn, this is just the prettiest comic book on the face of the planet. Can I get prints? Wallpaper? Dresses with prints on it?

If I didn’t already over-identify with Kate, I do now. Thanks, Williams and Blackman!

The drowning sequence was just the right amount of freaky. And I wonder if the Lady of the Lake has Alice. Oooh…

I don’t know why Chase thought she’d get information from Jake. He’s a hardass colonel with years of experience of only giving people exactly what he thinks they need to hear. Now Bette, she’s a way better target.

As much as I like Maggie and Kate (and yay for queer characters having actual relationships), I’m not sure how well they actually work together. I can understand them from Kate’s point-of-view, but I’m not really understanding them from Maggie’s. Why is Maggie involved with Kate? Why does she care? I hope we can explore their relationship a bit more from her point-of-view. I mean, if I was stood up, I’d have gone home a long time before two hours of standing in the cold and wouldn’t have come over to knock on the door.

First, who sullied this art with the giant white stroke on the opening editorial text? What the hell? In no way do I claim to be an artist (though I was once a graphic designer), but even I can do better than that. Even I know better than this. Seriously, DON’T RUIN THE ART, ASSHOLE IN THE EDITING ROOM.

Also, this issue felt light. I didn’t count pages, because I’m not that kind of person. But I felt there was some missing content.

I really hope that Bette doesn’t die. Poor girl just seems like everyone’s pawn in this issue: Kate’s, Jake’s, Cameron’s. At this point, it would be incredibly sad if Bette died. Especially since I like this idea of Batwoman starting her own crew to rival Batman’s network.

While I’m still hoping to see more of Maggie’s motivation to be with Kate, I’m so happy that there’s sex in this book. Woohoo.

Batwoman continues to be the prettiest comic book out on the market today. I do feel like this book is shorter than other comic titles (especially with the continued advertisements for the rest of DC’s new 52 all stuck in the back), but it’s definitely of higher quality than a lot of other titles.

Somehow I think that Kate pretending to play nice with the DEO and Director Bones is going to bite her ass big time. Bones and Cameron aren’t nice people. Though I’m glad to see that Kate didn’t just dismiss her father — despite cutting him out of the photo of her and Beth — and still cares about him on some level.

Kate’s battle with Maria’s ghost was beautiful and wonderful. I loved that she won by forgiving herself for not knowing that Beth was still alive and being turned into Alice and for Alice’s death. The water and ghost visuals are just beautiful. I love that Kate’s healing from her new-found grief in a productive way.

The ending phrasing was a little ominous… This title is coming back, right?