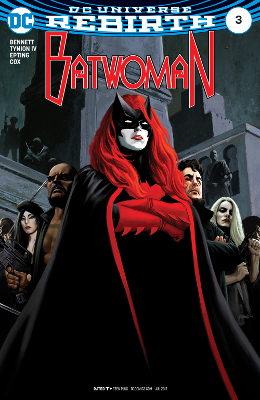 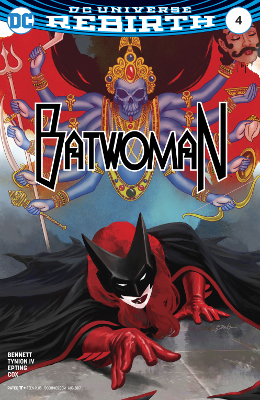 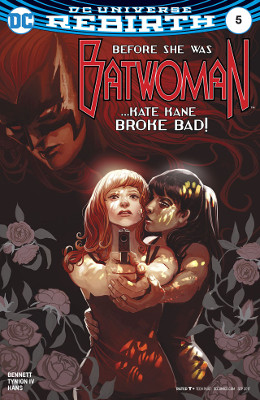 This just isn’t quite hitting it for me. I think I’m kind of over Tahani as a villain. She’s obvious. And she exposes Kate as Batwoman for our Kali corporation creepy twins, Elder and Younger.

Julia’s bingo sheet o’ evil including that they were creepy twins and had a checkbox for twincest may be my very favorite thing ever.

The opening seen with Tahani eating her Georgia O’Keeffe vag painting fruit was too much. Like way too much. This is how we know she was in love with Safiyah.

Who is the heir is the big question? (And who is the father of the heir? Though I guess an heir may not need to be a direct blood descendant.)

Epting’s touch of military stars with chains on Kate’s button up was pretty great. There were some very nice details. Though I still think one of the most absurd parts of all Batwoman comics is how pale white she is. She’s like paper white.

Despite my love of fennec foxes and Epting’s art, this book remains highly predictable. Of course, Tahani was bested by Kate. Of course, Tahani was also in love with Safiyah, which made her anti-colonialism speech hollow and sound just like jealousy. (Also, if she’s working with the Kali Corporation and with Elder and Younger, she shouldn’t be talking anti-colonialism.)

I’m still not sure who this Kate Kane is. Is she angling to be some kind of warlord? Is she looking to clean up her past?

Julia is right not to trust her. I assume that’s Batman she’s secretly communicating with and has some kind of plan with.
Anyone else also assume that Elder and Younger are talking to Safiyah at the end?

I’m a huge fan of Hans’ art. Especially Hans doing queer romances. Her art is gorgeous and luscious. It’s the type of high femme that Kate and Safiyah themselves are. Which is what makes is so lovely.

What I enjoyed most about this — besides the artwork — was the insights into who Safiyah was. Previously, we’ve had Kate, Tahani, and others telling us who she was. Telling us what she was like and why she did the things she did. Here, we see her firsthand.

It’s been obvious that Tahani’s rage at Kate is jealousy. But I didn’t guess that Tahani and Safiyah were actually a couple until Kate washed up on shore. I’d assumed Tahani was in an unrequited love situation. (Well, Safiyah may have not loved Tahani, but there was lust.)

Gold dust in Kate’s head wound was pretty ridiculous. Even if it makes for some lovely shots of Kate’s head.

How can I get a fennec fox?

It was interesting to see Safiyah go against everyone and her own instincts around killing Kate. I do want to know more about Safiyah. About how she got started being this warlord broker. About why she does it and more about this mystery. And if Kate did actually bring the world to Coryana. (Though right now, she’s definitely brought Batman.)

Given how ruthless Safiyah has been portrayed, it’s kind of interesting to see her letting both Kate and Tahani — after Safiyah figures out she’s plotted Kate’s death and stops her — live. But maybe Safiyah’s heart is the point.