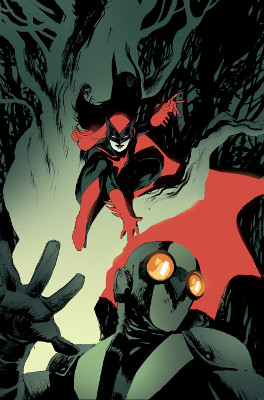 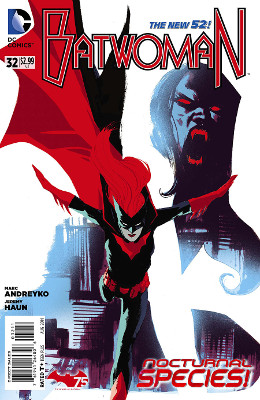 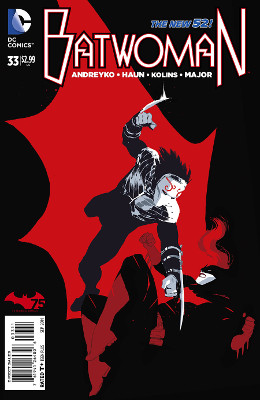 What? Wolf Spider is Evan? Who would’ve guessed? Oh, me, a lot of comic books ago. And let me guess, his little gold tribute is going to wake something terrible out of the swamp. Oh, do I know what happens in comic books.

I kind of hope that all this law stuff is going to bring Kate Spencer into the fold. Fuck you, DC reboot.

Anyway…I’m sure there’s something going wrong with this lawyer Mr. Matthews. Something worse than him just being busy. Maybe he did something really horrible. Or is a super villain.

So Noctura is going to be part of this book. Good thing they just didn’t put her on the cover for kicks.

Is it just me, or does it feel like I’m missing an issue here? Sure Kate and Maggie are fighting, and Maggie had to go back to Metropolis to fight for custody of her daughter Jamie with her ex-husband Jay…but…. That was a little cold. That felt more like the custody battle was also a small break in their relationship.

And interesting that Kate runs into her ex, Sophie, who’s now a full colonel. Just in time to create even more tension between Kate and Maggie. I see what you’re doing, Andreyko.

Nocturna’s tale is growing. I was pretty surprised to see that she’s actually some vampire-like creature. I didn’t see that coming. Also I’d kind of thought that perhaps her affection for Anton was real. Which makes me wonder just how he became her stealing partner. Though Nocturna’s got a few enemies that she doesn’t even know about.

Batwoman seems over her head if the cops are on their way. It’d be one thing if Maggie was in town. But if some random cop shows up, this could be extra trouble.

So Kolins’ art was pretty terrible. Like I’m glad he didn’t sexy up Kate and gave her muscles, but seriously, those were some weird portions. And his Nocturna… She may be a sexy vampire, but she could be wearing an actual stylish dress. She might have a sexy body and pose sexually, but that dress is not sexy or stylish by any standards.

I get that Kate’s not smart sometimes when it comes to law, and between being true to herself and her money, she says and does what she wants. So while it’s not out of character for her to call up James to bargain with him, it’s incredibly stupid. My bet is that she told James she wouldn’t marry Maggie, and thus, Andreyko can walk DC editorial’s line of no marriages for heroes and not get fired. Or this is going to get Maggie to break up with Kate.

Night-Thief needs to have a little conversation with his sister. They could probably solve some problems together. Or at least decide which way to have things. Also, I think Anton just might get slapped by his sister.

Can we get some better, consistent art please?