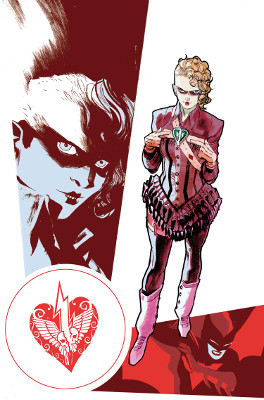 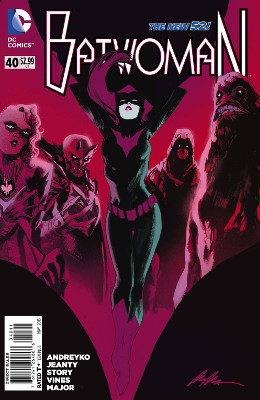 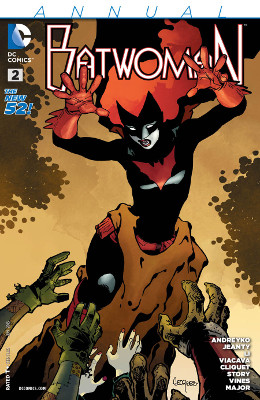 While the plot is coming together, the pay off for it finally being coherent is not so great. I still, for the most part, don’t really care about any of these characters. And for the issue where Kate’s being pretty direct with Alice about her being back — and back without Jake or word from him — Alice is too coy here for this plot coming to a close.

I’m not a fan of Alice’s new outfit or makeup and hair. It’s too harsh, and trying too hard to be modern fashion. I want more for her design. Batwoman just started out setting impossible standards for art.

I might eventually like Ragman and maybe even Clayface. But the others, they just leave me cold and feel esoteric. And don’t even get me started on the literal egg that Morgan Le Fay steals to raise her army.

Not really a fan of the final reveal with Nocturna, Alice, and Kate. Sure, Andreyko made good on his promise that Nocturna didn’t rape Kate, but hell, he even had Kate ask about if it was rape. It was a bad cop-out and just a bad plot.

Alice’s dialog was extra weak in the scenes between them.

Kate seemed way too helpless. She did act as if she had a broken heart (from Nocturna). Or at least was really angsty about the entire situation.

I really don’t care about them defeating Morgan le Fay or being a happy family of monster hunters. Seriously, this might’ve been okay if Batwoman was going to continue to be an ongoing title, but it’s not. I’d rather have emotional wrap-ups of other longer plots. Like their family.

One more issue of this title making me sad with lost potential.

And this was the sad death of what was one of the best titles in the DCU that came to a crumpling, lingering limb. Just when you thought the Morgan le Fay plot couldn’t get anymore annoying, it was transformed into olde tyme Gotham.

Yeah, Clayface is gross. And the potential of Ragman and Alice remain ever so lost.

Even if it was nice to see Kate take out Noctura after the confusing and pathetic fight last issue. There was still no rhyme or reason to the entire thing except that villains are evil and do evil-y thing.

I am glad that Andreyko was able to stick in a small moment of Kate being an adult and going to talk to Maggie. I guess it can live on in fanfiction, even if DC goes ahead and puts Batwoman on the backburner.