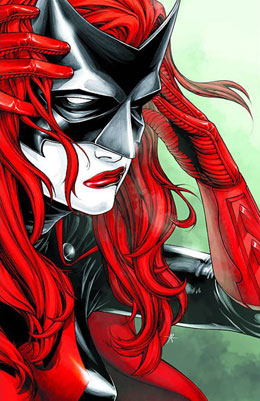 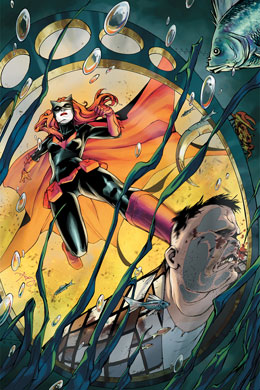 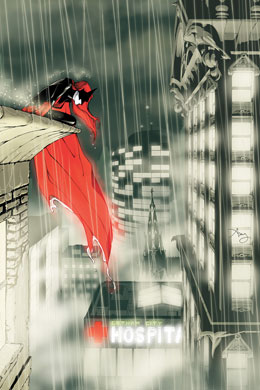 I really love the 2nd panel of Batwoman’s face in this story. Probably one of the best Reeder depictions I’ve seen of the character. The more she draws this book, the more I can see Williams’ influence on her style. Especially in how things are starting to break apart across the page, and Williams is known for his fluid layouts that mimic the motion of the story.

Interesting that someone’s trying to revive folk tale monsters. But isn’t Gotham already full of monsters? Or is there a bigger difference between super villains and these monsters?

The serpent gang symbol looks a bit like a question mark. Foreshadowing? I can only hope.

I’m glad that we see Maggie looking at the photo from her desk. Even if we don’t get to see it. Obviously, it’s of her ex and their child. Nice to know that part of her life still exists despite the reboot.

Yes, the past will probably come to haunt both Maggie and Kate and drive a wedge between them.

Nice lampshade on the new artist with Kate getting a modded suit from the DEO. However, why am I seeing her navel outline? And she better be careful not to get hit in the face.

I wasn’t really feeling it with this issue. The writing seemed a bit blah, and the pacing was off. As was the layering of the pieces of the mystery. I didn’t care how all the “stories” and the times matched up. In fact, I’m not caring for it written that way. There’s not enough meat to the story to pull it off.

I am, however, betting that “mother” is Alice. Or perhaps I’m hoping. Or is it too soon?

I felt a little bad for Abbott, our werewolf. He did step in a mess. The villains are leaving me a bit cold as both Bloody Mary and Killer Croc have giant assumptions that the reader will know/understand enough to fill in the back-story. And this Hook guy is just creepy, but reminding me too much of the twisted giant stereotype.

Lacing a tranquilizer with Scarecrow’s fear gas is just straight up mean.

I like that Sune joins the fight at the end. I’m hoping that she’s here to help Batwoman as I’m still a fan of Batwoman having a team. Of course, she’s going to have to get Chase and the DEO off her back first.

I’m wondering where this plot with Jake visiting Bette is going to go. If it’s a device for Jake to tell his story and more back-story about the Kane family, especially Beth and Kate. Or if he’s going to start mentoring Bette if she ever gets better. Girl in coma isn’t much of a story.

Yeah, how’d I guess that that tranquilizer with extras went into Maggie’s arm.

Could care less about Hook’s back-story, especially as a pedophile and/or child murderer. The only takeaway is that they are transformed by something physical, not just magical, tied to their bodies. Or it seems that way.

And really, Killer Croc, sewage? No wonder you have so many eyes and other weird deformities. I’m surprised he’s not dead from that snack habit alone.

Decide for yourself what you think of Batwoman Vol. 2: To Drown the World