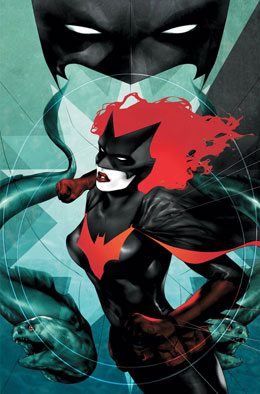 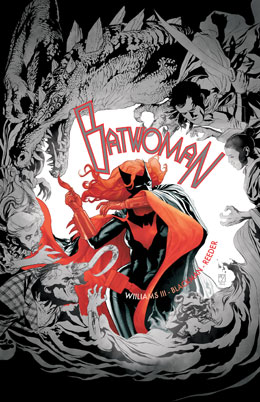 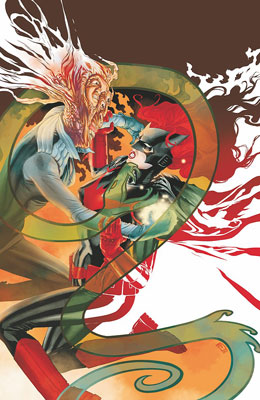 First, omg, I did not see Sune kissing Kate coming. Joining Kate’s new team, yes. Kissing her, no. Is Gotham City where all the pretty femmes go?

Anyway, I think McCarthy must be either from the school of Williams or Williams did a lot of work to make his art mimic the Batwoman style. I do like the texture he added to her costume, especially on the bat ears. The bombs being labeled DEO was kind of cute.

Interesting that Maggie and Kate both go to the party in dresses and that Maggie’s in pale pink (child-like) and Kate’s in blood red. Maggie’s just lined up to get her heart shattered into a zillion pieces.

Falchion kind of bores me. Mostly because this guy Maro is obviously powering the operation. Okay, Chase isn’t going to let agents have secret identities with each other. I get that. However, Sune did just go from baddie to captured to try to reform. She doesn’t exactly have her entirely good person badge yet.

See this is why I thought that Chase letting Sune know Batwoman’s secret identity without more trust being built was a very bad idea indeed. That’s some shitty DEO policy.

I didn’t even catch that Maro was a woman until about halfway into this issue. Hrm. And Sune being Maro is silly. Blah. Okay, she change her face. Still it would’ve been nice to have a woman of color in this comic. And the start of Batwoman’s army.

No one cares that Falchion is dead. But, of course, Batwoman has the sword that can kill Maro. (I also feel like this is super similar in plot to when Renee killed the leaders of the Religion of Crime and became a leader. If Kate does kill Maro that is.)

I’m glad that Bette isn’t dead. Wow, Jake is overly guilty. Perhaps he needs to go see a therapist, not a rabbi. I hate to say it, but a lot of parents have a favorite child. Though considering Beth disappeared when she was 7, it’s hard to say how much of his favoritism really affected Kate.

You know, I’m totally okay with Perez coming on board. I loved his pencil’s in Miller’s Batgirl; they were pretty awesome. And always really on target for what women really looked like, especially when fighting. Hey, maybe Kate will have the same size of boobs in and out of costume. That would be rad.

I have to admit, I was really worried about the art. Especially after the second big layout where Maro/Sune is drawn really muddled — a bad interpretation of a man and woman as one — and what the heck was going on with Kate’s Batwoman wig. Seriously, it looked like they were trying to give her bangs. Her wig doesn’t have weird ’90s country music bangs like I did in 3rd grade.

I’m always nervous when the villain gets away, given how books are canceled these days. Of course, Batwoman is one of the strongest selling titles that DC currently has, and as long as Kate’s story remains awesome, I think she has real staying power. Kate’s not only a great case for a woman lead who can carry a book, but a new character — yes, I know she got her inspiration from the original Batwoman — who people are really starting to pick up on.

I do hope that Batwoman can save Maria and the children. Of course, Chase threw Batwoman under the bus when she had to talk with Maggie. Like that wasn’t going to happen. Just glad that Batwoman heard them chatting.

I appreciate the continued differences in styles of art when it comes to Batwoman’s and Kate’s lives. Because Kate does keep them really separate.

I loved the whole scene with Maggie at the end where Kate opens up. (Though a little remiss that there was no information about Renee.) And in turn, Maggie shares about Jamie. Yeah, those two have other big secrets that they can keep from each other. Their families shouldn’t be one, even if the memories are painful. The only real oddity in this scene is where Maggie slags her ex’s new wife in being rich as Kate is also rich.

Yay! Bette woke up. And of course, Jake will take whatever daughter figure he can train in his image.

Solve the mystery yourself, buy and read Batwoman Vol. 2: To Drown the World