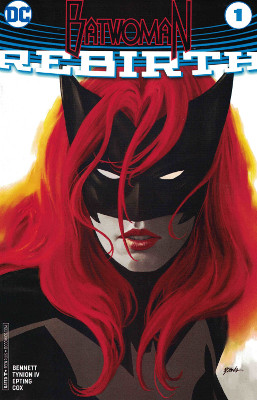 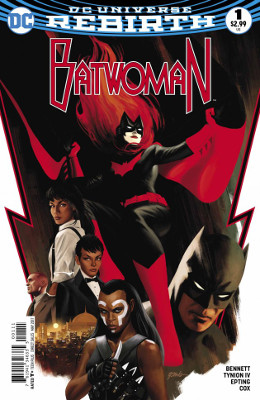 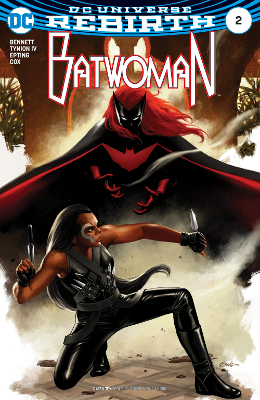 Let me tell you a story about a woman, who’s been reading comic books for almost 15 years, who cannot keep track of the silly reboots, and who read issue #1 of the new series before this issue. Even though this issue comes first.

So this issue is technically a beautiful issue. But for anyone who’s followed Batwoman, we know nothing new about her from this. We just know that they’re keeping everything Greg Rucka and J.H. Williams III built for Batwoman cannon, and whatever Tynion has been doing in Detective Comics. (Which I will admit that those parts were new for me. His stuff was always a “I will pick up the trade at some point, right?”)

Except Coryana and Safiyah are new, and trouble in Coryana is the plotline that picks up in issue #1. (That’s some good gay hair on Kate right there.)

I was surprised how well Epting’s art mimicked Williams’ and Amy Reeder’s here. I often feel as if I need to get better at understanding the comic book art I enjoy, since all three are artists who styles I very much enjoy.

I haven’t read the other Batman comics featuring Batwoman. I kind of gave up on Kate’s story a bit after the mess DC editorial made of her and the series. I debated whether or not to pick this issue up. I went back and forth for bit, but I like Bennett’s writing in general and Epting’s art.

In fact, I’ve missed Epting’s art quite a bit. He does such a wonderful job with movement in comics. Especially fight scenes. Epting pushes the story forward and into motion with his art. It’s fast-pace and drags you into the story.

Not sure what I think about Batwoman’s setup. It makes sense that Batman would like some people worldwide, but there were certainly others in the past universe I was attached to who might make more sense.

Julia Pennyworth is pretty fun. I love how she schools Kate on technology and gives her a lot of shit. Particularly about how Kate’s not allowed to brood like Batman. Batman’s already cornered that market.

Not sure how this entire Coryana plotline will pan out. I’m never one for plots where women don’t remember what happened to them, and I cannot figure out if this is going to be one of them.

I’m still trying to grasp what is going on in this book. On one hand, it’s very pretty. Epting has seen to that. I don’t think I’ve seen this lush and romantic side of his art before. On the other hand, what the hell is going on?

If I was Kate, I would’ve never left the island with fennec foxes. Though let’s just not think too hard about how her girlfriend Safiyah was actually ruling over warlords. Or some mystical peacekeeper, who was actually kind of shady. And Kate was okay with that.

Some lost year… My lost year involved working at a newspaper, typing up obituaries, and being the only damn person who knew how to change the ink in the printer and fax machine. (Yeah, it was that long ago that the fax machine needed new ink at least once a week.) My lost year, oh so boring.

Batwoman, on the other hand, almost gets killed by a bunch of mercenaries who are pissed that she did something to interrupt Coryana’s peace. We don’t know what this is. We also don’t know where Safiyah is. I assume she is alive, since no one talked about her as if she were dead.

This whole Kali Corporation, we shall see. Rather on the nose to name an evil corporation after a Hindu goddess who is a destroyer.