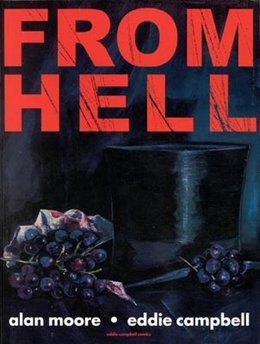 From Hell is my second favorite Alan Moore novel, only surpassed by V for Vendetta. Moore takes the same zealous for research that he used in League of Extraordinary Gentlemen and applies to the Jack the Ripper killings. However, it’s more effective in this historical novel. The tale is engaging and Moore’s relentless research makes it more than just another real life, re-told slasher tale. Moore’s notes, which appear at the end of the collected novel, are a wonderful addition to the text and definitely worth the read. (I chose to read them while going through the story itself. As we already know all the “spoilers” for this history, Moore’s notes don’t ruin the story.)

Eddie Campbells’ dark pencils and ink illustrations bring the horror of this tale to life. It’s certainly graphic — both with sex and with the murders themselves — but Campbell’s lines keep the graphic nature a little tamer than it might’ve been. Especially if they’d chose to do From Hell in color.

Moore comes to the conclusion that Jack is Doctor William Gull, due to both the police’s cover ups and incompetence and Jack’s precision surgical mutilation killings. He traces it to a conspiracy to cover up an illegitimate royal child. When a groups of prostitutes (one connected to the child) make an attempt to blackmail an artist with royal connections, Moore has Queen Victoria herself commanding Gull, the royal family’s doctor, to “take care of the women” as not to expose the bastard child.

Moore further peppers this tale as a Masonic conspiracy. He is definitely not a fan of the Masons. Moore builds Gull’s obsessions and calling to these killing as his Masonic duty, royal duty, patriarchal duty, and duty as a God. Pre-killing, Gull has a seizure or possibly stroke with an accompanied vision of his place as a Masonic God. (This is where Gull’s psych begins to crack.) Gull eventually breaks down as the final murders are executed. In fact, Moore has Gull’s life end locked in the same sanatoriums that he used to run. This is Moore’s Jack the Ripper’s ironic punishment.

What I liked most about the story — besides the research — was Moore’s treatment of women. I’m not always a fan of what he does and don’t think that he’s a very woman-friendly writer. (I blame this on both Moore’s bad divorce and his old hippie mentality.) However, Moore takes these forgotten women, disposed of by society and looked down upon, and builds them lives. The reader connects with them, particularly Marie Kelly. You feel empathy for her situation. You want her to leave London when the killings progress and she realizes that she is a target. A target both because of her career in prostitution, her circle of dead friends, and she’s the one who instigates the blackmailing.

Marie is certainly not the smartest character. She should leave. She shouldn’t throw out her loved ones or bring home people she doesn’t know. Moore crafts both her fear and her frustrations. Marie’s utter desperation. However, history is not kind to Marie. She is Jack’s last and perhaps the most tragic victim.

In addition to providing a theory about who Jack the Ripper is and creating empathy for his victims, Moore is also fascinated why these murders were never truly solved and why Jack was never brought to justice. He is also interested in all the novels, newspaper articles, and all the other official media and unofficial stories running around about Jack the Ripper. (Moore is also not shy about calling out authors who he believes are shoddy researchers and writers.) I think this part of history is a very important element, especially to a modern audience living in a time where the gory murders would’ve been solved by DNA in about two seconds.

In the Appendix II, Moore and Campbell create another small comic that features authors and those invested in the investigations of the murders. Moore even add himself as part of the group trying to catch Jack the Ripper.

From Hell is a dense read, but one worth your time. Moore builds a wonderful world in Victorian England and brings the characters to life.