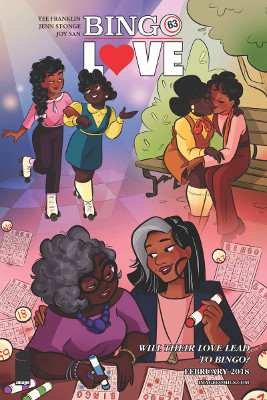 Disclaimer: I did back this book on Kickstarter. Which is really just a way of saying, I backed a book that I thought would be enjoyable, but I still paid for it, so why is this disclaimer here?

To the actual book, I loved Bingo Love. I loved its characters. I loved its love theme. I loved the art. I cried while reading it. Yes, cried. (Listen, I’ve watched Grey’s Anatomy for 14 seasons, and I don’t cry at it. Stone cold.) This warmed my cold, cold heart.

Bing Love is about true love. But it’s also about how to care about the person you love. How to really take care of them in this world. Both the writing and the art are extremely conscientious about this.

This is also an important graphic novel when it comes to queer black women and their representation. Hazel and Mari’s love story felt new and previously untold in ways that it shouldn’t have. We should have a ton of stories of the love between queer black women. I’m glad Franklin and St-Onge have put Bingo Love into the world to add one more.

In 1963 as middle schoolers, Hazel and Mari meet each other when their grandmothers play bingo together. They fall into love instantly. But being so young, they instead become each other’s best friends. This definitely happens to queer girls, and so much of this story reminded me of the intense, deep friendships I had when I was that age where there may have been some unrequited sexual tension too. They are inseparable, and as they age, their families start to suspect their lack of interest in dating boys is more than just their youth.

When they’re almost done with high school, the young women admit their feelings to each other. They even share a kiss on the stoops of the church on a bingo day. Of course, Mari’s grandmother spots their second kiss, and Jackie immediately separates the girls and calls Hazel’s grandma. Hazel and Mari must choose each other or their families.

While you want them to run off with each other, it’s much more realistic that they don’t. In fact, over 40 years pass, and we find an unhappy Hazel. A Hazel who very much loves her family: her husband, their children, and their grandchildren. But she’s sacrificed herself, her own identity, in order to have her family.

Mari reenters Hazel’s life, where else, but in the bingo hall. The bingo hall that Hazel comes back to all the time for her memories of personal happiness with Mari. They return to their church stoop for more kissing as if no time has passed.

Of course, it has, and Hazel’s youngest Marian (named for Mari) catches them. She does not approve. Mostly because she sees her mother as a married straight woman. It seems like Hazel must again make the choice between love or her family.

Hazel’s husband James finds out, but it’s not as bombastic as you’d think, given Marian seems to be the biggest cheerleader of her parents’ marriage and the most delusional about its happiness. James is also unhappy. Hazel is not prepared to let Mari go again. Nor should she have to choose.

Eventually, the families come together. (Mari had her own marriage, children, and divorce.) And the women aren’t going to stop making up for lost time.

Here, I adored how St-Onge drew the middle-aged versions of Hazel and Mari. They are women marked by time, motherhood, and life. Sure, they look gorgeous, but they look gorgeously human. And they showered each other with love and delight. Their eyes and body language speak so much to their love. Their wedding was so sweet.

Of course, we know that Hazel and Mari are slowly getting older, and death is only thing that can part them now.

The beginning of Bingo Love is set up as retelling of their love by an elderly Hazel. It’s subtly hinted at from the very beginning, specifically Hazel being called “Elle” by the woman she’s talking to, that this other woman is an elderly Mari, who believes herself to be a teenager again.

As someone whose grandfather suffered dementia, how Franklin portrays Mari’s dementia is heartbreakingly real. From Mari being stuck in her moment — when her family rejected her queerness and she wanted to flee with Hazel — to the upgrade in technology allowing Hazel to show Mari the younger version of herself which she remembers. (And what a lovely technology that would be for those suffering memory loss.)

We know Mari will die soon, and we know Hazel can’t live without her.

But Bing Love cannot be stopped.