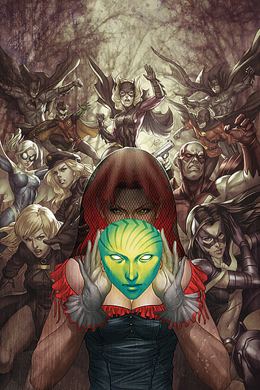 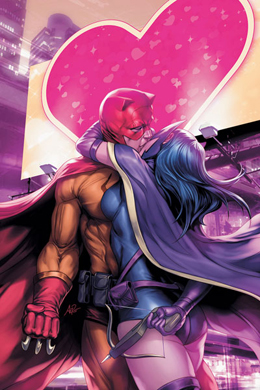 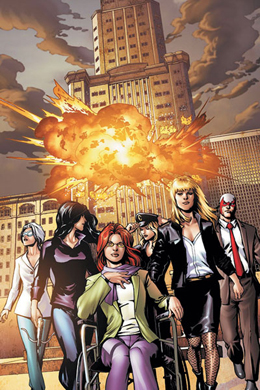 I’m not so sure how I feel about this plot of Barbara pretending that Oracle is dead and not helping the other heroes when they call on her. Yeah, I get that most of them can probably solve their own problems, but the first time one of them dies while phoning Oracle, Barbara isn’t going to be too happy. (Yeah, I know there was a throwaway line about others like Proxy and presumably Savant can help.)

Miranda’s art was the most cartoony style that I’ve seen in this book yet. I’m not sure how well that style fits this story. It almost made it too light. Not serious enough.

I loved that Huntress knew how to create disdain among the Calculator’s henchmen in order to have them take him down. Yeah, she’s a vicious bitch when she wants to be.

Yeah, you don’t piss off Black Canary. She’s going to come back and kick your ass.

Though I thought it was kind of weird that Zinda made a comment about only being the pilot when she’s been in a lot of fights.

The ending note with Selina telling Helena and Dinah that she knows Barbara’s still alive was perfect. Meaning that probably someday, Oracle will be back helping those heroes she said she wasn’t going to be helping anymore.

I do have to say that it’s interesting to see Perez’s art in a book that is about older adults, not young women. While I enjoy his pencils, I do think his style is more suited to 20-somethings than 30-somethings. But, none-the-less, I’m happy to have a talented and female-body friendly artist on this title. Though in that one scene where Huntress bandages up Catman’s stomach, she looks about the size of a 5-year-old against his massive 6-pack of doom.

Poor Catman and Huntress! Their love is so tragically doomed! On purpose.

I love the back and forth between them, especially as they battle to protect each other. Both of them are battle leaders and not afraid to get hurt. (Can we please get Huntress back into a navel-covering costume though?) And I really enjoyed how Simone showcased both of their powers — her detective skills and his tracking skills — here.

Catman’s so not as evil as he thinks he is, but I do think he’s correct that Huntress is on a higher path than him and she wouldn’t have given up on his redemption. Of course, he couldn’t have really pulled off playing up his evil side if he hadn’t had Deadshot’s help.

That last line just tugged on the heart strings. Guh.

Wow, Simone just cranked up the gore and horror that’s going to be in this book by 11, didn’t she? Also clearly, she’s gearing up for another Birds of Prey/Secret Six crossover of awesome. Yeah, Babs hasn’t really faced Junior’s level of horror since the Joker.

I’m not sure how much I like Saiz’s art. Mostly in that, out of costume, I had a hard time telling his Zinda and his Dinah apart. Just because they’re blonde and they have about the same length of hair doesn’t mean they are identical twins.

Speaking of twins, how much do I love that Simone is carrying on with the tradition of Junior employing twins, but this time two women.

I love that Huntress and the Question working together, and that Simone is using the Question. Yay! I also adored Renee calling Helena out on not knowing what it’s really like to be poor and her privilege, when it came to Renee having a hard time believing the cops that they went after were actually dirty. (I’m also curious as to how Renee being seemingly killed, but then coming back to life plays out, and if Simone is carrying on the storyline where Renee maybe took on the Mark of Cain from Vandal Savage.)

Dove and Dinah taking on Junior is certainly going to be interesting. I can’t wait until the next issue.