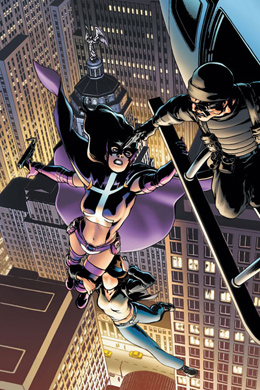 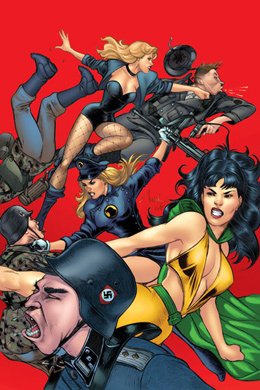 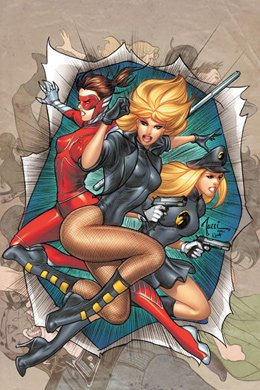 I know I gave this issue 5 stars, but you know what I really didn’t like? The Super 8 comic plastered in the middle of the story especially just as Junior stabbed Dove and Dinah carries her upstairs and away from Junior. Most of the time, I tolerate ads. I understand that they’re a necessarily evil which helps support getting my comics published. But this interrupted the flow in a major bad way. I couldn’t flip passed Super 8 quickly enough.

Which also means that Simone was writing a damn fine comic.

But before the writing, I wanted to talk about the art. I like Olmos’ art here. I like it in the same way I like Nicola Scott. The ladies are curvy, and I see a few butts. But I don’t feel like I’m going from butt shot to boob shot to o-face and back again. I also felt like he placed Junior’s deadly scissors in action in places where Dove did actually have to bend to avoid it. Anyone working on a Simone comic, especially Birds of Prey, has to be able to draw action.

What really shined here was Simone’s writing. Particularly the team dynamics. One of the reasons Birds of Prey is so popular, especially among female readers, is the way that Simone portrays female friendships and dynamics. Here, Oracle calls in back-up, both bringing Huntress and the Question in and calling Catman for information about Junior, because she loves her team and those women are her best friends. She knows they’re over-their-heads and that Dove has been hurt. I think this is huge for Babs and her growth. While I don’t think she’d leave someone to die, I do think that an earlier Oracle might’ve not been as concerned for Dove, who’s a brand-new team member and someone she doesn’t have the same history with as Dinah or even Helena. The fact that Babs declares war on Junior because she hurt Babs’ girls is so different than just going after Junior because Junior is an evil criminal mastermind.

Then there’s the huge growth in Dinah’s character. When Babs declares Helena field leader because Dinah’s been off her game, Dinah graciously steps down and congratulates Helena. Years ago, this wouldn’t have happened. And I have to greatly applaud Simone for her work on these characters and making them love each other and not be catty or bitchy or jealous. I feel like if this scene was given to almost any other current major DC writer — instructions: write out Babs telling Dinah she’s out as field leader and Helena’s in and their reactions — Dinah would’ve gotten angry and jealous and pointed out everything Helena’s ever done wrong.

On another note, I’m still so in love with Huntress and the Question working together. I’m glad that Simone’s carrying forward with this after the women worked together in Rucka’s last Question story. Though I am waiting for Renee to figure out Oracle’s secret identity on her own.

Okay, really, if Simone isn’t writing my BoP, I’m glad it’s Andreyko. I love and adore his Manhunter comics. That said, given what happened last time on BoP, this story — no matter how much I enjoyed it — gave me a bit of whiplash.

I found the Phantom Lady, Zinda, and Dinah visiting a charity auction for veterans to be endearing. Dinah’s comment about Spanx was hilarious. Sandra’s so awesome. Of course, Dinah being so emotionally moved and thinking of her mom was just a wonderful touch to the story.

I adore ‘when heroes have days off’ narratives, and this was just wonderful. Even if their team dinner was broken up by some lab-made super soldiers wanting to resurrect their Nazi leader.

My only other off moment is that I didn’t immediately recognize Kate. Duh. Like so duh. But her pencils were just really different than any incarnation of her I’ve seen before. So I guess she also knows that Oracle’s not dead?

This issue was a lot of butt-kicking action. Too much. Given this being the last issue of Birds of Prey before the relaunch, I wanted more bonding. I wanted more pages after Babs pulls out the different menus for take-out.

Ubiquitous Nazi villains trying to come back to life are rather ubiquitous.

I did like to see all the women fighting together one last time. Sigh.

I loved Dinah commenting on how Sandy still has it.