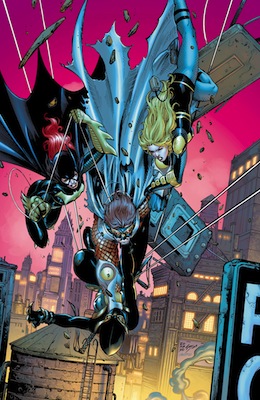 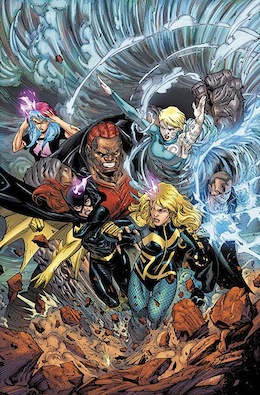 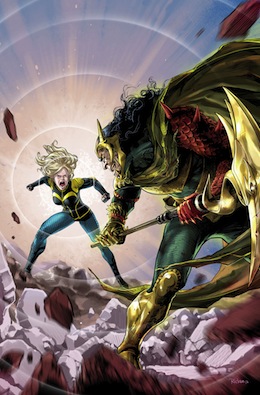 Ugh. I called Condor and Dinah making out a long time ago. But seriously who thought giving Condor a ponytail was the right haircut in 2013? Whomever designed him needs to be slapped. I don’t need ’90s nostalgia.

The Talon stuff seemed to have only come up due to the other book, and perhaps trying to get readers of Birds of Prey to pick up Talon. Not happening with this reader as I found him wholly uninteresting. Except that his costume vaguely looked like Aquaman’s.

Okay, I so called the Condor and Black Canary kissing. Not that it wasn’t completely obvious. I still think it’s kind of dumb.

Same with Babs popping in and out in order to accommodate for her having her own series. Batman wouldn’t have to do that, no matter how many titles he’s in, just saying. While I can appreciate Marx trying to bring some timeline realism, this is comic books and they are superheroes.

I’m not sure I care at all about Condor’s past and his former terrorist team, Basilisk. Actually, I know that I don’t, especially Tsiklon’s jealousies over Dinah. However, I think Uplink needs to be rescued and become part of BoP. I hope that happens.

Ugh. For some reason Molenaar’s art seemed more rushed and actually quite a bit worse than all his other issues. Not sure if it was a time crunch or what. Characters were just drawn sloppily and that big muscled guy (who’s name I can’t recall) just looks like a mess of lumps and veins. And I could rant more about Condor’s early ’90’s hair, but I won’t.

With the exception of Strix, I didn’t really learn anything new about the characters from their dreams. Instead, I got what I already knew that Babs would want a happy family, that Condor has a crush on Dinah, and that Dinah wants Kurt to have survived.

Who didn’t see that coming.

This book hasn’t been rating very strongly with me, so I’ve removed it from my pull list. I might pick it up in trade if I hear it improves.