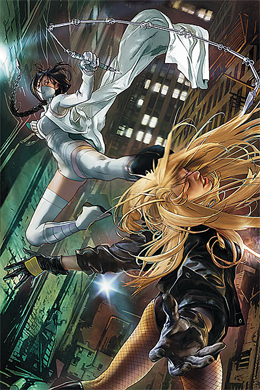 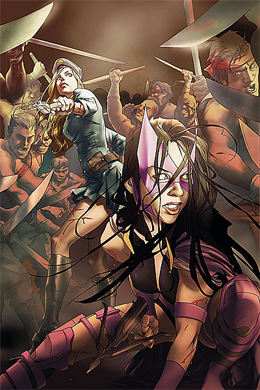 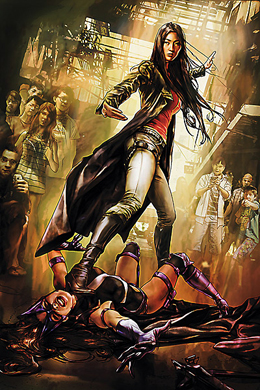 Birds of Prey #4 by Gail Simone

I do think Simone pulled off a high-intensity, action-and-emotion-filled issue well. There’s tension all throughout this book. And I’m liking the art a little better now that Melo is taking the edge of Benes’ often over-the-top t&a.

The bits with Barbara on the roof with Creote and Savant were brilliant. I liked the reveal that Savant wasn’t there to kill her, but to kill himself. That his mental disorder makes it impossible to put his torture by the Calculator in the past. And Barbara being the one to dive after him to save him worked really well. Though I do think it was perhaps a little odd that it was Barbara telling Savant that Creote loves him at that moment, instead of Creote breaking down and saying it.

As for the rest of the Birds, Penguin’s sudden inevitable betrayal doesn’t surprise me in the least. He’s always been a bad guy. And no doubt, they will let him go/live for another day to save Dove.

Birds of Prey #5 by Gail Simone

On one hand, I’m glad the Benes is no longer on the pencils for this book. On the other hand, I hate how the new artists draw Dinah. Or at least, whomever did her big reveal on the very last page wearing the White Canary’s duds. She kind of looked like a drag queen version of Dinah as the White Canary who’d gotten bad plastic surgery.

At first, #5 had me hooked. I was all absorb. I’m totally with Babs on being the biggest Creote/Savant shipper. Though she’s a little too much of a shipper for another character in the story. It kind of reminded me of that scene where Buffy, after just having broken up with Riley, cries about Anya and Xander’s relationship. (I’d be crying too, but not from its beauty.) Adorable. I’m also glad that Babs finally owned up and took them in as a real part of her team. Also realizing the fact that she can’t always be on the computers.

I was also all on board with Dinah making her choice to leave Gotham to save Sin and their reputations and to take out Lady Shiva. Also cool with the Birds being outlaws.

However, about the time that Hank did his whole not-a-Black-Lantern thing, I was lost. I know, I could read Wikipedia. I could ask a Black Lantern fan. I could read someone else’s review who is a Lantern fan. But I can’t help but think that maybe someone who’s heard that Birds of Prey was an awesome title, didn’t pick up the trades yet, and decided to pick up the new series would be horribly confused at what was going on.

That said, I totally buy both Zinda and Helena going after Dinah. They would so do that.

Birds of Prey #6 by Gail Simone

I love Simone’s writing in this issue. I think this is the best Birds of Prey issue in the new run so far. Simone’s love of Helena really shines through in the brilliant way that Helena makes sure that Dinah lives.

That said, I’m still not digging Lee and Melo’s art. The women’s bodies are pretty distorted. All of them are like 12-feet tall, and their faces are extremely long. At times, Zinda and Dinah look a little too similar as both of them are blondes. Which shouldn’t happen. I suppose it’s better than Benes’ T&A.

I love how originally Dinah was the one who pulled everyone together, and I love how Simone realizes that with so many other writers having messed with her story that she’d be kind of a little fucked up. (Like the whole thing with Sin and Ollie and Ollie faking Sin’s death.) So I love that Helena has taken that place. That Helena has grown so much that she’s there when Dinah needs her.

And, of course, any mission with Zinda being her awesome self — having an appetite when everyone else is worried that Dinah will die at Lady Shiva’s hands.

I do have a feeling that leaving the White Canary alive is going to come back and bite their asses.