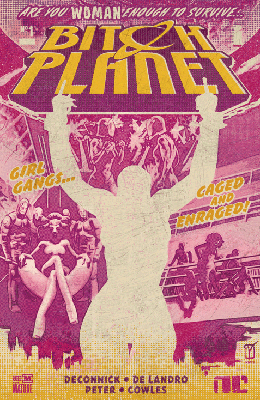 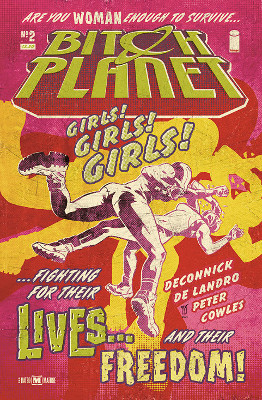 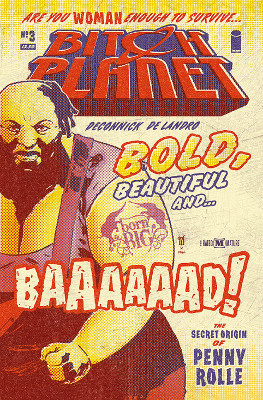 I don’t know if I have the words to express just how much I love this comic book so far. Run, don’t walk, to your nearest comic book shop and pick up this issue if you haven’t.

DeConnick delivers here a story I didn’t ever think I’d see in a comic book. It’s intersectional feminism at its best, showing the impact of white supremacist patriarchal cultural both at its worst and in the ways the women move throughout the story. Penny Rolle’s comment about her prison uniform only being sized big enough for one of her tits perfectly illustrates this. The personal impact to Penny is that she can’t properly fit in the clothing assigned to her and that she’s once again being told she’s too big, even for a prison of non-compliants. And the larger message to all the women is that of body shaming and size shaming, of the belief that women’s body are objects for policing and should be a like society has told them.

I really appreciated the fakeout of Marian Collins as main character and the attention to making this not just another comic about white people. (I was hopelessly spoiled about this — by choice and happily — by DeConnick herself months ago at Rose City Comic Con.) Marian’s story serves to show the extreme of this culture. It sets up the reader with sympathy and the assumption that most of the characters on Bitch Planet are in for nothing. (Though I do assume we’ll also have some prisoners who are locked up for real crimes.) It also adds mystery to the story. Marian’s murder is somewhat of a MacGuffin as it doesn’t actually matter who was murdered, just that someone innocent was. It again reinforces the culture. It shows that there’s also a woman working as a double agent to stir up violence and the one who actually kills Marian. (My bet is that it’s the woman we see at the beginning.) It also sets up the next part of Bitch Planet — the reality TV part — and Kamau Kogo as the star of both it and the comic book.

I was very impressed with De Landro’s art. I don’t believe I’ve read a book with his art before. One of my favorite scenes he did was the prison riot one. I love the mass of women’s bodies and how they just don’t give a shit that they’re naked and can only fight back with what they got. De Landro plays with the exploitation-angle, but never makes these women center of a male gaze. Just some fabulous, raw work.

Go pick yourself up a copy (or five) of Bitch Planet #1; you won’t regret it.

And this book remains fucking fabulous. Possible the best comic book out there currently being printed. I love it.

Kam is fucking awesome. I love how she’s horrified about what’s happening and scared, while also exhausted and maintaining her resolve not to give into the demands of her oppressors. Loved how DeConnick chose to bring in women as the prison guards, or at least the ones really working to manipulate the prisoners. The men stay safely behind the scenes, playing god. Or at least the confession lady.

Oh, Whitney, wow, DeConnick is smooth with her. With her threats, offers, deals, and how much control she believes she has over her fellow women. When they’re all really in the same situation. I love this head on confrontation with #notyourshield and other “well, one woman said it was okay, so all women agree” bullshit.

And De Landro’s pencils of the woman in stirrups that Whitney’s doing something to in the sidelines when Kam makes her bargain to have a team in the Megaton: chilling.

I still pretty convinced that Violet is a plant. She’s way too eager to get them out in front in the Megaton and causing havoc. (Penny starting a prison fight in the background is the very best. I love her so much, and it does make the scene humorous. Love De Landro’s details.)

Meiko is pretty rad. I’m going to take it that for a while their goal will be to keep Meiko alive since she’s so much smaller than the rest of them. Unsurprising that a woman who’s an engineer got shipped off to Bitch Planet.

Continuing to love the essays in the back of the book. They are such a nice touch.

Hi, my name is Erica, and I’m a non-compliant. I also fucking love this book!

Penny Rolle is an incredible character for a zillion reasons. I love her backstory so much, and DeConnick plays with so many aspects of Penny as a non-compliant, fat, black woman. I love how she learned her defiance and ability only to be herself from her grandma, Bertha Alexander.

Of course, the scary part of DeConnick’s story is how everything Penny is criticized for is already in our culture. White women already tell black women how to do their hair. Women already get harassed or threats of violence for eye rolling at men or commenting that they should take up less public space. Media already tells us to be thin and promotes new diets all over the place. People do feel free to loudly comment on people’s weight, and men, in particular, already think it’s okay to loudly comment on how fuckable women are based on body type. And black people like Penny, who were wards of the state and have a “history” of aggressive behavior, are likely to get arrested for breaking a TV. Which someone with a smartphone would capture and use as evidence or at least online ridicule on YouTube. (Of course, in our world, it would likely be Penny’s owned shop so she might not get arrested, but you never know.)

Yep, just too close to the surface.

Penny’s backstory also gives some nice information on what the world’s like. Such as she is able to get into a fight and punch a boy without being hauled off to Bitch Planet. Mother Siebertling also gives insights into the foster system’s culture brainwashing, an acceptable “in charge” role for a woman, and even more into the ideal woman. I’m sure it’s no coincidence that she looks an awful lot like the Mother Superior hologram.

I thought Wilson did an excellent job at filling in as a guest artist. I particularly loved how he drew Penny and Bertha and Penny in her muffin shop.

The only thing that’s thrown me off in this book is that I didn’t expect Penny to be so young, to only be 22. I guess her impulsive defiance shows her youth, but I thought she’d be a few years older, perhaps in her late 20s.