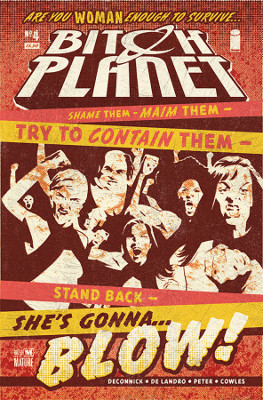 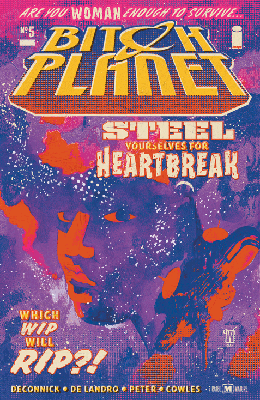 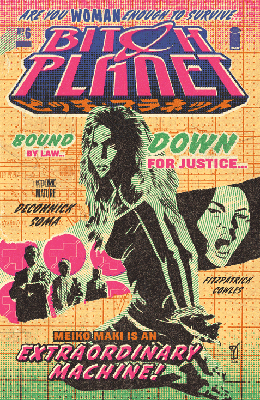 And now we know perhaps why Kamau has been put on Bitch Planet or at least what her angle in all of this is: to find her sister. I like that it took us four issues to get here. I take it that her sister is the one with the glitched out name.

Kamau should really not trust anyone’s information. These ladies who work the patriarchy here are probably known for misinformation and will easily turn on her. It’s not a surprise that the men want to use the Duemila as an excuse to kill the Bitch Planet team. I am getting more curious about why they just don’t outright kill the women. Is there capital punishment here? Seems that would serve the patriarchy’s agenda well. At least, we haven’t seen anyone come back from Bitch Planet.

Whitney continues to play her role as a collaborator. I love how Kamau just sees right through her.

Oh, Tommy Peepers, Kamau has got your number. Or more like the spot on your penis.

This book continues to rock my revolutionary, intersectional feminist world. Yeah, we all knew that the games were going to be highly rigged. Same with the training sessions for them. Poor Meiko. Kam’s great plan is already unraveling itself. No doubt both she and Penny will blame themselves (and the guards).

This also serves to show how the athletes may retaliate, and get away with it, when the women start winning.

Makoto was an interesting man. Only because he doesn’t completely buy into the patriarchy. He even took the risk of referring to his wife as someone he consults about his life — the parts which affect her — before making decisions. Also, wow, didn’t expect him to be Meiko’s father.

Essentially, these guards see the non-compliant women as second class citizens, as animals. It makes sense that they’d get too angry being beat at the game by animals and go to kill them. Particularly the one, Meiko, who made the goal.

The news reporting had some greatly over-the-top signals about the society. We see woman as animals, women in the equivalent of minstrel depictions, referring to them as “girls”, not to mention blatant racism with the sports team’s names. (Not that the racist latter — or frankly, all of it — doesn’t line up directly with our own world.) Unsurprisingly in this society that racism and other ~isms would be alive and well. I cringe at what’s going to happen when DeConnick brings in a transgendered character.

Lindy West, as always, rocks it in the back essay.

This issue makes me even more saddened by Meiko’s death. I know no one is supposed to be safe, but wow. Meiko is amazing. Soma’s art rings it in.

I’m also happy that we get our first murderer. In that, we’ve seen all the other woman locked up for crimes of living. Now yes, the narrative sets us up to empathize with Meiko or see how we’d do the same exact thing in her shoes. Especially after seeing all the oppression happening in this book, it felt thrilling to see Doug die by Meiko’s hand. We also set up to not believe that Meiko’s crime would be murder. (Though no doubt a zillion other things were brought up during her “trial.”)

Loved learning more about Makoto and Yume and seeing how they were working against the system. Loved Yume teaching the girls calculus and other academics under the disguise of violin lessons. The part where she warns the girls that they must know enough violin to pass is haunting.

Oh, Doug and his reeking privilege and cultural appropriation. I’ve met Doug a thousand times. I know so many white guys who list their sexual preferences as Asian women, and they are every bit as a gross as Doug. Once again, DeConnick does a brilliant job at making feminism an intersectional issue (as it should be).

Meiko is a fighter.