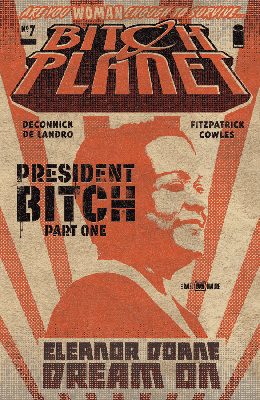 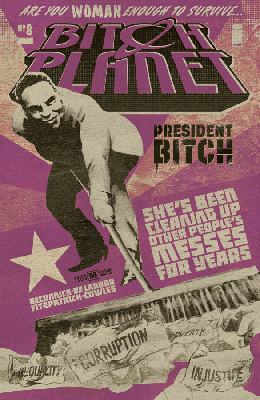 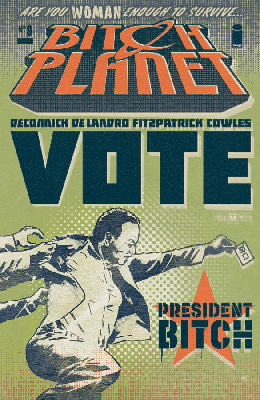 The subtle themes and messages in book make it so powerful. As much as I like the in-your-face main message about toxic patriarchy and how everyone loses, it’s the small stuff that pushes this book from good to great.

Loved the continuing theme that, of course, a society that devalues women would also have no problem killing black children for trespassing. Interesting commentary on the ideas of corporations as people (re: Citizens United SCOTUS decision) as the security guard invokes trespasser rules typically reserved for those “defending” their homes. And the parallels of black children’s dead bodies not being worth the time to take care of in an efficient manner like in Ferguson.

Of course, Maki gets led around by the AI. She can lie to him easily about his daughter.

Loved seeing the men arriving at Bitch Planet and which of them cover their genitals and which don’t. The Fathers have nothing to hide, literally. (Except no doubt they all have skeletons on their closets, just power to hide them.) Which of course, loudly contrasts with how they expect women to act.

The moment between Kamau and Peepers definitely established that while she has dirt on Peepers, he isn’t going to risk the other guards thinking he’s being soft or nice to a prisoner. Loved the reveal that Bitch Planet is much bigger than Kamau was thinking and that there are many more compounds. Which means there are probably way more prisoners than guards…

Adored Kamau comforting Penny over Meiko’s death. She said the perfect thing to Penny. Loved their moment of solidarity and vulnerability with each other.

Of course, Whitney is now locked up. The patriarchy is quick to punish even the women who defend it. And, of course, she ends up as Kamau’s cellmate to fuck with them both. I like how Whitney wears as much clothing as possible because she knows.

This book continues to be a work of art and defiance. It continues to be the biggest middle finger to the world, to the comics industry, and to what we consider acceptable writing, art, and storytelling.

I cannot wait to find out more about Eleanor Doane. We’ve seen a little bit of resistance. We’ve seen Meiko and her father Maki. Love the chaos that he’s creating and how much he knows Meiko is dead and how they did it to her.

Whitney continues to be the worst, but Kamau does know her knowledge of the layout of the station will come in handy. I don’t know how much the workers get told. Especially the women workers. Though if Whitney knows about the other areas of Bitch Planet, then she definitely knows something more than Kamau.

I love Facility One with the transwomen. Kamau’s sister Morowa is the best, same with Rose. (Also Morowa means “queen” which I love a lot.) I just want to hug Rose. There’s no doubt that Bitch Planet could make you attempt to kill yourself. I’m so incredibly happy DeConnick has made a commitment to telling stories about transwomen and making sure they’re treated like humans, unlike so many other stories. I also expect we’ll be learning about Kamau’s and Morowa’s life before very soon.

I cannot wait to learn more about the facility. Who else is there? How are the other prisoners divided?

This book is too fucking real right now. With what’s going on our country, I expect a Bitch Planet to open up any day now. Though instead of being in space, it will be owned by Trump. (Private prisons treat their prisoners worse and cost the state more dollars in the end, and Obama was putting an end to them, but the private prison industry loves Trump.)

It felt extremely cathartic for the prisoners to start rioting — and seemingly winning at their rioting — this far into the book. All those punches felt like we were winning. Because of course, we are cheering on these women. Even though winning is questionable.

DeConnick slammed us right back to reality though, when the guards predict that the cisgendered women will start fighting with the transgender women. Only together can we be strong. And there’s no clearer message than taking over Bitch Planet.

We see it’s Kamau’s connection and love for her sister Morowa that calms then.

Not to mention Eleanor. Who is Eleanor Doane?