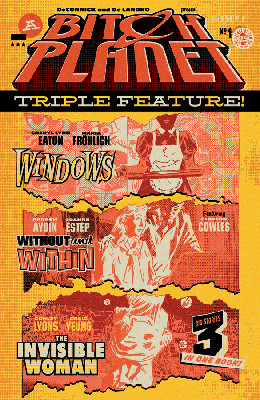 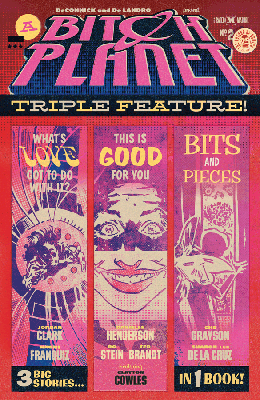 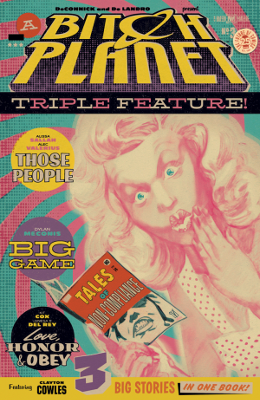 Lupe, you just want to hug her. Actually, you want to take up arms right besides her because she’s a ride or die.

I do think it’s interesting that they’d let women be in the military. I wonder if that training was before when Eleanor was president.

Then Lupe is put on Bitch Planet, where she struggles to be in control of prisoners when the male guards expect her to submit to them. I was kind of surprised they let her leave.

All Lupe’s expressions are in her eyes because she cannot make any other moves. Otherwise, they will know that she wants to slit their throats. Here is the compliance of the other women, particularly the head maid.

The men patting themselves on the back at how sophisticated they are compared to the common folk was laughable. Especially since they love those gladiator games. Then they don’t noticed the glitch, but Lupe does. She’s smarter than they are. And can probably kick their asses from here to Sunday.

Without and Within by Andrew Aydin
Art: Joanna Estep

Agatha and Carol, they don’t know if they can trust Ann Winters. So instead, they let her be harassed. Well, not so much as let, they know. They have the looks of women who know, but they don’t know if Ann won’t report them for trying to protect her. The patriarchy is so fucked up.

I did appreciate them covering their mouths so the cameras couldn’t see their lips and talking about what dipshits the men were and how they talked nonsense as legislators. But, of course, in their own way, they are making sure the government runs smoothly for these men.

I hope Ann kills all these men, especially the one who tried to rape her and almost cost her her job.

The art here left me a bit flat. While the story enraged me, I didn’t feel much else. There wasn’t quite the depth that I was looking for.

Leslie, she gets a visceral reaction. You want to shout, “You go! You let them know! You flash your tits! Be proud!” I say that as a fellow member of the itty-bitty titty committee.

What she does to please her boss — her hair — to get her promotion. That she doesn’t get the job because she isn’t a man. And because she showed initiative and want, she is fired for it. Jobs aren’t what a woman is supposed to desire.

I can’t help but wonder if the women who are graffiting the ads are in Leslie’s mind. How are they not being actively arrested? Especially since the moment Leslie flashes the cameras, she is taken down.

This story is rather creepy. Of course, any pageant featuring children is just creepy. The satire comes from it being not about their overall beauty, but specifically their necks and how Tabitha becomes a winner due to a shiny gem she attaches to her throat.

Because the focus is the tween’s necks, there’s less of a sexual component compared to the beauty pageants we have in our world now. Toddlers and Tiaras much? But the object focus comes in when Tabitha is taken away to become a body part in the lab.

While Tabitha as object works well, what doesn’t work well is the questions that arise from this facility. Why are they collecting girls’ body parts? What’s the purpose?

I’m also not sure what to think of the art. It reminded me a lot of Mad Magazine‘s house style. Which fit with satire, but doesn’t feel like Bitch Planet. Which perhaps the art was my whole issue with this story in how it fit into this universe as opposed to just being a critique about kid beauty pageants.

This is Good for You by Danielle Henderson, Ro Stein, and Ted Brandt

This short tells us so much about how the patriarchal government keeps itself dominate in Bitch Planet. And so many messages here are just a razor thin line close to our world.

“And make the world safer for men” — This is really at the crux of the patriarchy. Men are “safe” to do as they please. While this story revolves around women (mostly, though we get a glimpse of school for boys will be boys), that’s what all this is about.

The women running on the treadmills surrounded by the word “fat” really got to me. Especially since that was the only message they were getting with no music or TV; though doubt those would’ve been anything but propaganda. Still running is the worst, and I’d be bored out of my mind.

The bits of the resistance we see were way too close to our world for comfort. How are they any different?

That part where the women get their hair done and other beauty treatments so no one will notice that they actually disagree with what’s going on. They are hiding, but also complying. So many layers here.

Amalla’s story gets to me the most out of this issue. Perhaps it’s because I’m in “old maid tax” age myself. Because the pressure to have children (which I don’t want) is there from family and society. Because of this all importance put on having babies, especially white babies. (The end scene with the pantone colors next to the baby’s skin was such a brilliant addition to show the racism in society.)

But yeah, I’m struggling to write a review because this story is too close.

Those People by Alissa Sallah and Alec Valerius

Valerius’ art wasn’t my favorite. I could tell why this story was picked because it is both absurd, but also a big comment on the heteronormative patriarchy. The art gives it the absurdity.

But the story, the story is the same one. The “othering” of people by police or military who are going to take military-like action on them. The story of the one guy who gets nervous and trigger happy; because in his mind, the people he’s going to arrest are demons who are stronger and scarier than him. Even though he’s the real demon in the room.

I wish we would’ve seen more diversity in gender presentations at the queer dance. It seemed like every woman had on a dress, and every man, suits and ties.

I knew from the start this would end in a blood bath.

Isn’t this pretty much already happening? At least when it comes to the Minute Men who “patrol” the US-Mexico border.

Of course, the Bitch Planet twist is that they are hunting a woman and her baby who has ran away from her husband. One thing we haven’t completely figured out in Bitch Planet is how far the patriarch government extends. Could you run away from it? Or does it cover the globe?

We see the violence in how the men hunt this woman like hunting big predators. (We even get the obvious metaphor when we see a cougar in the gun sight.) But we don’t see the rest of the violence she will suffer at home.

Betty was doomed even before we knew she was a bot. It makes sense that they’d invest in absurd technology like sex bots and still have a ton of other problems. Like I want to see the issue addressing global warming.

The detective and noir kick was absurd. Of course, the bot was named Betty.

It was pretty funny that Betty just kept fucking her “husband” after he died. Because she did obey. I like this idea that the patriarchy can’t even get what it wants when it builds a robotic woman so they don’t have to deal with real women.