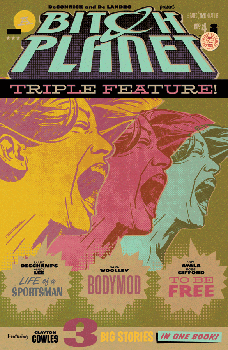 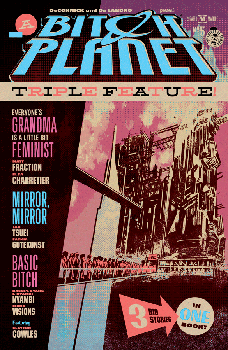 Life of a Sportsman by Marc Deschamps and Mindy Lee

I liked the concept of this one the best out of all three stories, but I don’t think it was as well executed as the other ones. The story centers around Mitch Herman, a star Megaton player, from his rookie year to his retirement from the sport.

Obviously, this story is about toxic masculinity in sports. It also touches on the head injuries common in US football.

First, it was a brilliant, satirical touch to have Megaton players all wear tiny, short shorts and crop tops. Brilliant. I had sheer delight over that artistic choice.

This is one of those stories where we’re basically a razor thin line into this world. Maybe Mitch never would’ve come back to play in Megaton (football) if he’d killed his wife in our world, but who knows. It could be very possible. We’ve certainly seen videos of NFL player abusing their wives by tossing them across a room, and then they still play.

While I appreciated the turn on Mitch at the end, I wanted a more impactful ending. (No pun intended.)

Creepy as hell. This story is about extreme body modifications. In addition to exaggerated body shapes, Julia has wings on her hips and Monica has full fins on her legs and is a human mermaid. It’s clear to some extent they’ve done it for men (especially Monica, who’s engaged to a bodymod doctor), but also for the general patriarchy.

The little touches of their changes are the most creepy parts. There’s acknowledgements that Julia takes a lot of pain medications and how Monica can only live in a low gravity environment; otherwise, she’d be in too much pain from the unnatural changes to her body.

Besides the child on the bus, I did want to see how the general world treated Julia. It’s clear she cannot hold down a job. However, it is the patriarchy in general? Or her mods? Or her mods preventing her from doing work? All kinds of unanswered questions.

At the end, I believe Monica yells due to being hit with some dog shit when saying goodbye to Julia. But it’s a bit unclear.

I do hope that DeConnick has a section of Bitch Planet for people with these extreme bodymods.

To Be Free… by Vita Ayala and Rossi Gifford

I wanted to love this story of the dancer who is also a cat burglar. Or recruited as such.

She does not live — or is put in a coma — as this is Bitch Planet. Over a pamphlet about birth control.

There is a now established Golden Girls wing of Bitch Planet. When I started thinking about all the different sections there might be, I don’t know why a seniors section didn’t come to my brain. Of course, there would be grannies who either are old enough that they don’t give any fucks or that remember how it was.

This story was an easy like for me as I love Charretier’s art and Fraction’s storytelling is usually great. Especially in concentrated spaces.

(As much as I love Fraction’s independent books, sometimes I feel his strongest ideas that pull through are in confined spaces where his writing is up against walls. I myself often shine in these situations more than “do whatever you want” spaces, especially in my work as an events manager, so I don’t look at this as a bad thing.)

Perhaps I also saw a bit of myself in feminist grandma. In the way, she told Rachel she was disappointed in her. Perhaps due to the nature of this universe, we readers are all feminist grandmas.

This story was also one of the few in Bitch Planet Triple Feature to have a hero. The other stories shone lights into different parts of this world, but this one had a character to root for, instead of just hope they were okay, or as in many, wish for their enlightenment or demise.

This was also more of the funhouse mirror, tilted just slightly askew toward us.

Jackson’s and Van’s story endings were obvious. Obvious because like a few other Bitch Planet Triple Feature stories, this is already our world. White actors get picked over people of color, and whitewashing has been especially prominent in stories about Asian Americans and Asian peoples. This story is Scarlett Johansson in Ghost in the Shell; her eyes and other facial features were cgi’d to look “more Asian.” This is Marvel’s insistence on Finn Jones playing Danny Rand in Iron Fist.

Of course, there is a whole host of white people out there who act like this isn’t happening in our world. But are they reading Bitch Planet Triple Feature?

Like the story before, this one showed us what was already happening in our society. Namely the appropriation of black culture without loving and caring about black people. It was layered on top of sexism and beauty obsessions pushed by this society that we’ve seen in other works. We’ve seen extreme body modifications in this world. The last issue had someone who turned herself into a literal mermaid and had to live in low gravity or die.

The funhouse aspect is that Paige’s cultural appropriation went so far, she felt racism. She turned herself into a black woman, and had no concept what life for black women was actually like. Then when the cops pulled her over for speeding, they arrest her for impersonating a white woman and they don’t believe her tears because Paige’s tears aren’t white lady tears anymore.

But is this the funhouse? There’s Rachel Dolezal and then there’s this lady, who is doing what Paige did with plastic surgery.