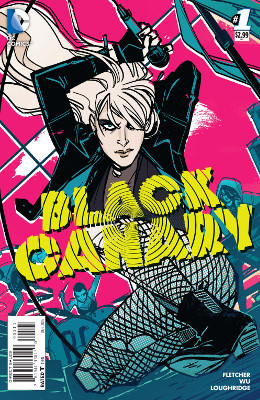 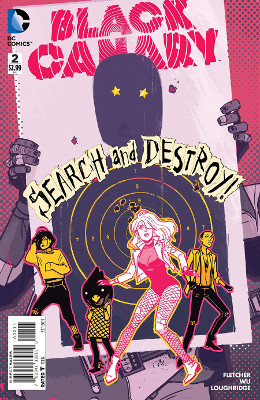 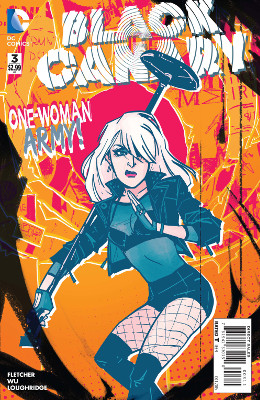 Wu’s art is definitely the best thing about this book. It’s dynamic and fun. I love how it’s used to represent Dinah’s personality and the Black Canary’s music, instead of other sorts of attempts to have lyrics or such.

Unsurprising to see that Dinah’s band attracts trouble, fights, and venues either don’t want them or don’t want to pay them. I enjoy that Ditto may be the source of the attacks, not Dinah and her attraction to trouble. Ditto reminds me quite a bit of Sin.

The canary cape is also fun design wise. Perhaps a little bit too on the nose.

Not a big fan of one of the baddies showing up being Dinah’s husband Kurt. You know, the dead one or whatever the New 52 is always nattering on about. Of course, we have all those universes back, so who the fuck knows.

Also, I just dislike the need for a white hero guy in this tale. Which you know Kurt is going to turn out to be. White hero guy to the rescue!

Clearly, Dinah and Ditto aren’t the only ones with secrets. (Though I did enjoy them showing how Dinah must bleach her hair on a regular basis, and yes, that shit does hurt.)

Paloma clearly has some history with guns because no one shoots like that without practice. Unless she has powers we don’t know about. Which at this point, even with everyone’s secrets, seems a bit unlikely.

Maeve seems somewhat harmless, just annoying, but you never know. Or she’ll provide a good out for Dinah.

I’m not sure why Dinah ever thought Kurt was really dead or blamed herself. She should know that no one really stays dead, especially when you’re a genetically engineered superspy.

I did not see the twist of Dinah’s canary cry coming from Ditto’s powers. Whatever they may be. Is that why Ditto doesn’t have a voice of her own?

Wu’s art continues to kick ass. I love how she styles each group of characters: the rock stars, the super soldier spies, and the aliens. They have their own looks and functions.

With Paloma’s perfect shot, I want to know more about her backstory. Who is she? What was she doing before she became a rock star? How is she so rad?

Oh, Bo Maeve, you’d bitten off way more than you can chew. Though you’re definitely going to confuse the aliens and the government agents.

Hop on the bandwagon with Black Canary Vol. 1.