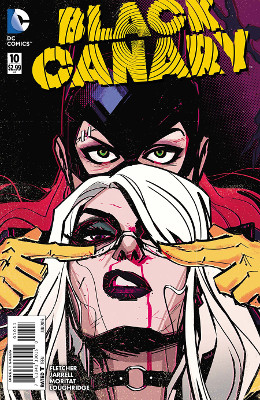 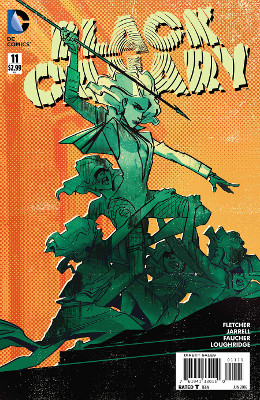 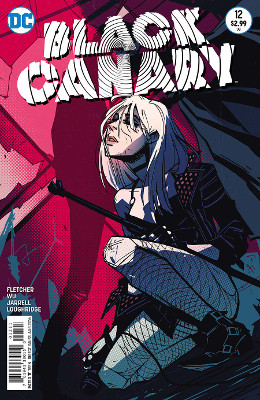 There were a few saving graces of this issue, but overall it was off the Black Canary quality. The moments that saved it for me:

Unfortunately, the entire battle with Greyeyes and the rest of the Ninja Death Cult felt like a waste. Especially when Greyeyes blew herself up. Seems like Fletcher had developed this character enough that he might want to use her more.

Moritat’s art is notably not my favorite and hasn’t been. I feel like every time a DCU struggles to find an end, Moritat ends up on pencils. Sadly, Jarrell’s work, especially in the many, many fight scenes, doesn’t move the book along. There’s no reason to see that much fighting and no real movement of the plot, unless you’re just trying to fill pages.

More battles without much plot movement. And apparently, there’s a few dimensional holes in the world in which one can travel great distances. I really wish I had those at my beck-and-call.

No one is surprised that Aunt Rena wasn’t really Aunt Rena. Or at least she was under the spell of Izak Orato. (Whose name I just picked up on now. Wow, sometimes I am slow.) Of course, he has a lot of people under his spell, seems that’s his thing.

I assume Izak is a vampire, but somehow broken by Dinah’s mother.

I wish Vixen had more to do in this book as I am fond of her. Maybe she’ll be the one to get Dinah out of this pickle. But maybe now.

This was a solid ending to the series. The dream of the solo rock n’ roll life that Izak put in Dinah’s mind as he stabbed her felt with some truth of if Dinah gave up superheroing for music and broke up with the band.

At first, the tragic life of Dinah played out much like many sad rich rockstars. However, the scene where Supergirl, Wonder Woman, and Babs come to tell a pregnant Dinah that Oliver is dead says that her life was at least a little bit happy. Even if we are only seeing the sad parts. And takes it out of the this solo artist pain narrative, if a tiny bit.

The art really made these scenes. Especially as Dinah aged, which isn’t something we typically see in our heroes. And maybe is part of Dinah’s subconscious about what she believes either her life will be like or what will happen if she does not continue to be a superhero.

I do love that it’s the band who saves her. Especially since Izak gave her the giant lecture on putting them at risk. Of course, Ditto exists in a world Izak cannot see. After Dinah saved her, it was good to see the favor returned.

The entire five palms was ridiculous. Izak and Rena were pretty ridiculous too.

I enjoyed that Ditto was able to hid herself from Waller. Seemed about right and fair. Same with Dinah handing over lead singer role to Bo.