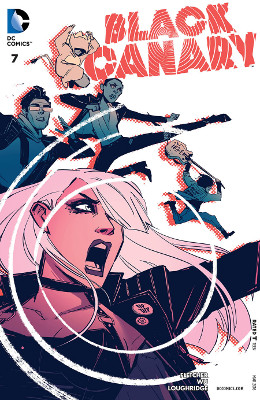 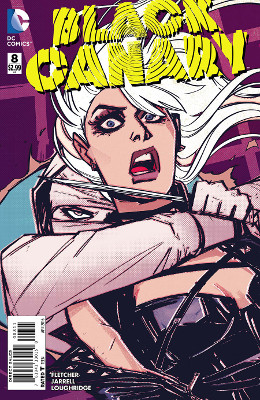 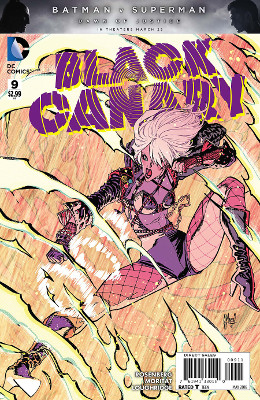 In many ways, this ending was a nice tie-up with a bow. It felt like an easy way to wrap up Dinah’s marriage to Kurt — especially since he’s very old and going back with Waller — and an easy way to get Dinah out of the band. Plus, Bo’s kind of made up with them. And it looks like there’s no more threat to Ditto.

My very favorite thing about this entire book is Wu’s art. I love the rock-n-roll style, which is very much a mix of 70s glam and 90s zines. I’m definitely putting Wu on my list of artists who books will make me happy due to the art. She also does killer facial expressions and expressions of personality through wardrobe.

I really appreciated the work Fletcher put into the book to make the plot somewhat realistic. There was some science and logic to the monster world, which is always refreshing. And nice to see the heroes having to use their brains in order to the save the day, not to just punch or scream their way out.

The only bit of downside of this issue is that because it’s the main plot around Black Canary and around Ditto, the other band members didn’t really get fleshed out. Except when they start throwing cymbals at the creature who attacks them after they see White Canary and her throwing stars.

My guesses for who White Canary is: Dinah’s mother or her sister. If we keep with pre-52 Black Canary mythos, Dinah is the daughter of Golden Age Black Canary, whose name is also Dinah. (Also a big fan of moms who name their daughters after themselves.) But if we’re trying to integrate this more into Arrow, the TV show mythos, this would be her sister. It’s already obvious they won’t be going with Simone’s White Canary, who’s the only sister of the Twelve Brothers in Silk and Chinese. (This White Canary is a white woman.)

Jarrell’s art style is a nice match to Wu’s. It keeps more cohesion in this book than the overall story itself.

Not a huge fan of plots where Character A is supposed to defeat Bad Guys and is rude to separate herself from her team. When Character A does her thing, unbeknownst to her the Team arrives and is taken by Bad Guys. This kind of missed communication is hard to believe in 2016, especially since this book is pretty modern. I get that Dinah didn’t tell her bandmates where she was off to, but it would be pretty easy to find out where the band was going on tour. Like so easy in a way that Dinah would be completely anonymous.

So White Canary is Dinah’s aunt, who wants to find out what happened to her mom. Definitely interested to see what kind of family mythos they put in here.

Not sure about Greyeyes and all the demon warriors she employs. Just why and what was she making Dinah learn? Also Greyeyes looks similar enough to Dinah that she could be her long-lost mother. Though you’d think the aunt would notice. (Also White Canary sure slipped in and out of that demon army headquarters really easily.)

Vixen remains the best here. She’s just like ‘let’s get out of here, I don’t care about your crazy family drama.’

This was just not that great. I miss the regular writer and artist, and I hope they will be back for the next issue. This issue took everything completely out of continuity, and it seemed that DC would rather ship a book than have fully continuity and quality. This makes me incredibly worried about Rebirth and so many title going to twice a month.

Moritat’s art isn’t my favorite. Though I’d say this issue was better than his stuff from my past experiences with him.

Of course, Julia is Carmine Falcone’s granddaughter, and of course, he’s in a current war with another crime lord who’s decided to put a hit out on Julia for her birthday. Though seriously that party list. Who thought that was a good call? Doesn’t Julia have any friends besides the boy Louis Barbeire who was also going to kill her is the assassins didn’t do their job.

It does fall into the whole line with Black Canary never getting paid.