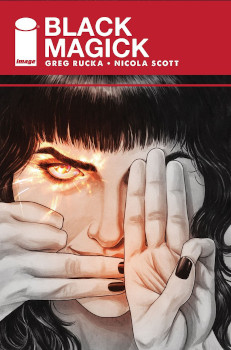 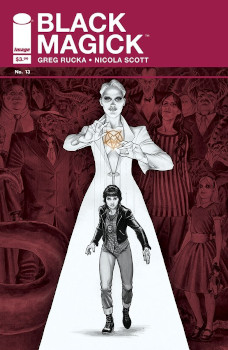 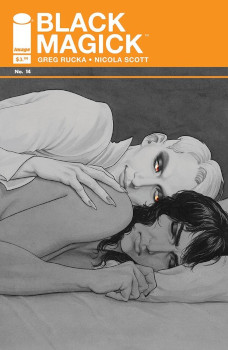 This book skips ahead six months or so, and honestly, I have no idea what’s going on. Like I vaguely remember some of it, like the demon, a new baby from the cop partner, the witch killer guy, and the talking cat. Thankfully, I still own the issues, and I wrote reviews about them, so I can go back and read those too.

Honestly, I didn’t ever expect to get another issue of Black Magick. So maybe 2020 did do something good for once.

Scott has changed the look of Rowan, and I’m not just talking about her hairstyle. Something about her physicality has shifted. The main reason I noticed is that Rowan was a doppelgänger for a friend of mine in those early issues. (She thought Rowan looked more like her sister, but still family resemblance!) And this Rowan looks less like my friend, maybe more of her distant cousin. Scott’s such a wonderful artist that I hope this is saying something about her character — and not in the very long time between issues, Scott’s made some changes to character design.

That sex scene between Alex and Laurent. Like I know it’s Beltane, but dang. I have to say I appreciate the explicitness of it. These books have so much explicit violence; why not show how people’s romances actually are, especially new ones.

Rowan uses her magic to get a criminal suspect to confess, and clearly, Morgan knows she’s doing this, or something. It seems more than sexual tension. Of course, the other cops don’t know that she has magical powers, or that magical powers are a thing. However, as we think a lot about policing right now, I cannot help but wonder if the creative team doesn’t want to write a cop story anymore. Or one with good cops and add to the copaganda in our media. This will remain to be seen.

Did Scott change Rowan’s design, or does she draw long necks on everyone, and it’s Rowan’s new haircut?

So maybe it’s the sexual tension that has Morgan so obsessed? Rowan sleeping with her new partner Nicky is a bad idea. I mean, I’m still betting that Rowan gets fired from the police force. (Foreshadowed with the police captain’s conversation with Morgan about how he doesn’t want to fire either of them.) Now, there is a non-supernatural reason for it to happen.

Like sex is fun, but I don’t buy both Rowan and Nicky not caring about what comes tomorrow. One of them, sure, but not both.

Alex will be so pissed when she finds out that Rowan already knows about her demon problem. I suppose this is how you make a plot in 2020 when everyone has cellphones, and you have to get more elaborate in communication breakdowns around sharing information.

Either Alex is hitting a real child possessed by a demon and will go to jail for killing a child, or she will die here. I’m not too fond of either option.

Yeah, these misinformation-type plots are not my favorites. I can do without this entirely. I want Alex and Rowan to talk together, and I don’t care that Nicky is uncomfortable or jealous. Seriously, you cannot get that upset without cause. It seemed too contrived for the plot’s sake.

I’m glad that Alex is alive, and I’m perfectly happy that we’ll never again have to see the creepy little girl with her mouth sewed up and carrying around a doll. That’s a demon I can do without.

The cover made me worry that Nicky was possessed by the demon who has invaded Rowan’s space.

The world-building hasn’t led in any understanding of why Hawthorne also cannot seem to tell Rowan about the demons. Rucka implies that familiars are at least part demon, but then why do they help or live with witches?

Because he loves Alex, I don’t want anything to happen to Laurent, either. Maybe he’ll be able to take out Stepan.

I’m still not quite sure what I’m missing in this book, but there’s something I want that has not appeared yet. Maybe it’s connected to Hawthorne calling Rowan “Mothers.”

Also, I certainly do not want Gilles to die in a duel! (I just watched Hamilton like a month ago, so this dueling thing is bad news. Even if they have swords, not guns.)