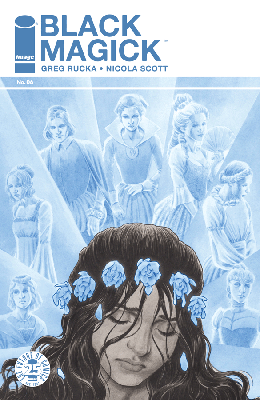 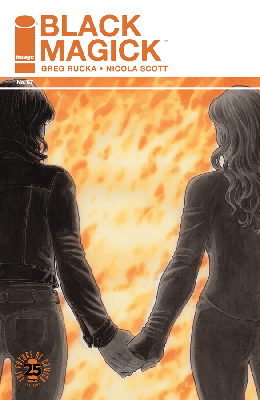 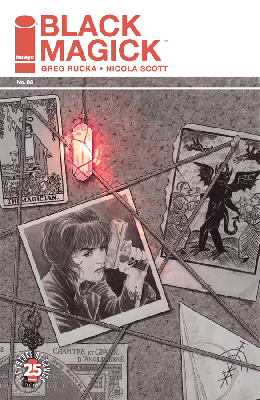 I was worried this title and the giant lag between issue 5 and this newest one would’ve kicked me out of the story. But Rucka and Scott dragged me back in. I think it’s very smart that they show Rowan as a child instead of putting us right back into the action of issue 5.

Scott’s art remains a huge highlight of this book. She makes incredible choices on how to keep the book in a sepia tone (with a little color) and the highlights and lowlights.

I felt so much empathy for Rowan here. Though you’d think her mother and grandmother would’ve tried to prepare her better for it. I guess Rowan probably wouldn’t have wanted to remember her past lives, especially since they all seemed to end in grief. You just want to hug Rowan.

Then we see her grief start with this life: her mother’s death. How creeptastic.

Is the “feels different” mean that this curse will be lifted? Or is this Rowan’s last life?

As we jump back into the present, I’m questioning just how much of the last issues I remember. I know other folks love to reread, but often that’s asking too much. (There are just so many great books out there with so little time to read them all.)

Morgan remains the most uneven character for me. I cannot figure out his motivations or how much he knows. Or now I even question how long he’s known Rowan since he’s surprised she has a lighter on her. (Or is this just a line in Rucka’s head that he had to use.) He’s also not an overly fun puzzle as I care a lot less about him than Rowan and Alex.

Who I’m glad they are fine. And that they took care of that demon lady from the other dimension.

It will be interesting to see the Hammer’s point-of-view on Rowan from their own histories about her past lives. Besides seemingly wanting to kill her.

Scott’s art remains brilliant, and I’m looking forward to seeing it refine even more as she jumps back into this book.

Stepan still sticks out like a sore thumb. I’m surprised Rowan’s cat is the first one to actually notice how he’s been watching her house. Laurent isn’t much better. (Also, where do these fellows get their names? You’d think a secret org would want people who can better blend in and seem normal.)

This issue didn’t really help me in understanding where Morgan is coming from, even if he explains that he’s been upset because Rowan’s leaving him out. (And his wife is overdue to have their child.)

But it did make it clear that Morgan has no idea about Rowan’s witchy powers, and previously, there was never any reason for him to know. It sounds like they’ve worked on rather more average human cases previously. It wasn’t as absurd as Rowan thinks it is for Morgan to think Alex and her might’ve hooked up. Though obviously, Rowan has a much older relationship with Alex than Morgan realizes.

Alex figures out which demon they are dealing with (looks to be the one that killed Rowan’s mom), just in time for Rowan to seal J.P.’s deadly fate which the demon put on a voodoo doll.

I haven’t talked much about the backmatter story, but last issue, it became pretty clear that Gilles and Adrien were becoming more than friends. This issue, queer kisses. Which is all likely to end in many kinds of tragedy due to the nature of this book and Rowan’s lives. I assume that Adrien is Rowan in a past life.