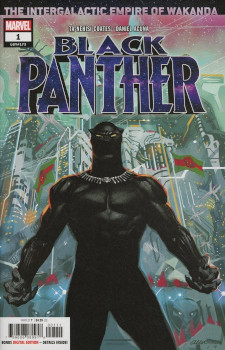 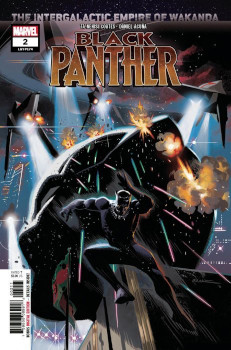 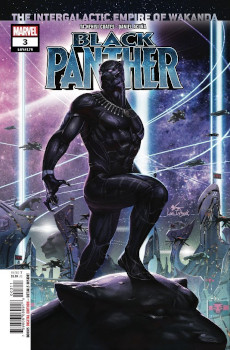 Is the Intergalactic Empire of Wakanda something that already existed in canon? Or is this something Coates is making up entirely? Is this supposed to be an alternative universe?

I love Acuña’s art. The way he draws movements across the page is beautiful, and I’m delighted to be reading a book from him again. Pretty incredible too that this issue was also inked and colored by him. The space coloring was pretty fabulous. It felt like a sinister Disneyland Tomorrowland. The touches of Black Panther and earth Wakanda were also great.

I am still trying to figure out what I think about the story. I’m okay with the space Wakandans being imperialist and colonists as vibranium does give any society a lot of power, and power corrupts. It’s not like many societies haven’t emulated the worst of the people who would oppress them.

What I’m never a huge fan of is mind wipes. Of course, it’s Storm who haunts T’Challa. I adore Acuña’s Ororo.

I do find it utterly unbelievable that T’Challa would forget his name and then be named T’Challa by the Maroons. I’m fine with him breaking out of the slaver mining camp, and even him ending up with the freedom fighters, all that tracks for our hero. However, the naming bit was a bit much.

I’m of two minds about this issue: 1) the flying space chase was boring because I don’t like (car) chase scenes, and 2) Acuña’s art is so beautiful.

I’m thankful there was a character guide in the back because lord knows, I need it.

Also, this book is the exact type of comic book that proves e-readers are still a terrible way to read comic books. I read in paper issues, but I cannot imagine trying to parse this one on a device.

The pacing of this issue greatly improved over the last one. There was a battle, but it fits into the overall story, and it gave us information about the Maroons. Unsurprisingly, Coates names the rebel group after a real group, the Jamaican Maroons. They were the descendants of slaves who escaped into the mountains and set up free communities of refugees, fought to keep their freedom and lands, and these communities are still there today. So Coates putting this rebel base on hard-to-reach mountains was an added callout to them.

This does remind me of everything I will probably miss in this book because of my gaps in knowledge about this part of history and Caribbean history itself. When reading Coates’ first run on Black Panther, I felt the gaps in knowledge affecting my review abilities because I didn’t know Black Panther as well as Coates. Due to comics vast canon, it’s a thing in comics where writers have to figure out how to balance “I’ve read every comic about the character I’m writing” with what they produce. When you use history, especially when you use the history of oppressed people that white supremacy keeps out of common knowledge and curriculum in non-specialized college courses, how translatable should it be? Is the readers’ lack of knowledge at fault? Did I feel the same way when I didn’t get every literary reference in The Wicked + the Divine, or was it only my specialized college courses where I learned about Shelley, Byron, Hemingway, etc.? (I went to the “poor” high school in rural Oregon, you all, if you are wondering about high school; the English teachers and an International Studies one tried.)

I’m glad Coates didn’t waste any time confirming that N’Yami and Nakia suspect T’Challa is the T’Challa from Earth. I liked the history of T’Challa and his name throughout this part of space. I love that it’s a common name as hero names would be in any culture.

Acuña’s art is gorgeous. He outdoes himself with flow, angles, and design. The way motion moves through the panels is exemplary and shows the best of what comic books can offer. The slightly muted color palette matches the tone of the book — it’s galactic without taking away from the seriousness of the storyline.